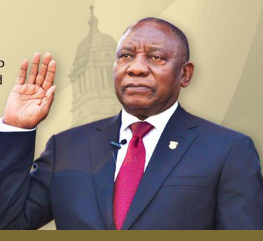 We forget it was the Ramaphosa administration that implemented NSFAS and people ask us what has Cyril done for blacks.

Someone said on Twitter that, NSFAS was started in 1999, just to assist you. It was from TEFSA

I used TEFSA and paid it off after getting a job. No I didn't, Mar I remember in December 2017, President Jacob Zuma announced that at the beginning of 2018 free higher education will be provided to all new first year students from families earning less than R350 000 per year

But nonetheless it is @MYANC.

Now I believe that love is blind. Your love for Cyril is one of those 'rose colored glasses' love. Implemented NSFAS? How? It sounds like you don't even know what is NSFAS.

Flipping ought! Zero…actually, Cyril has reversed a lot of the gains that accrued to us-the Africans, post 94. At some point, JSE listed companies were concerned about being BEE & EE compliant & that gave us plenty of opportunities more especially. African females today? None of them care.

Zuma announced free NSFAS, from being a loan scheme. One of the best decisions he has taken as President of the country. Announcing and implementing are two different things.

Under the Nat sit was called TEFSA & ANC converted it into NFSAS & incorporated blacks who were excluded previously. How is this an ANC / CR invention? Anyway, go drink your R100 for this propaganda tweet. It's Friday. Happy Weekend. Two of my siblings used NSFAS in 2005/2008 long before Zuma and Ramaphosa, my cousin bought his first car because he got a refund in 2004 after NSFAS and Fundza Lushaka both paid money to the school, in short unemanga. When I tell them that Cyril Ramaphosa's supporters are they don't believe me. There we go Lol @Constitution_94 is this was you guys talk about on Thuma Mina watsap group.