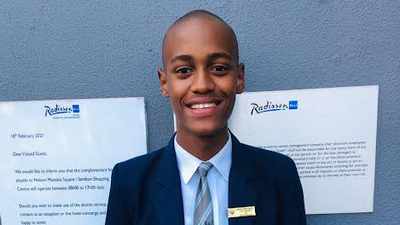 MLENGI Shange, who studied at Menzi High and did wonders in his studies Picture: SENT TO SANGWENI

HE WAS studying until he almost fell asleep at school because he avoided being disturbed in their shack where they lived in a shack and a number of students at Menzi High in Umlaza hit them on the head. Mhlengi Shange (18) from Umlaza in W was one of the guests invited by Basic Education Minister Angie Motshekga at the 2021. Matric results announcement ceremony.

Shange did well in Mathematics, Physical Sciences, Accounting, English, IsiZulu, Life Sciences and Life Orientation. He says he was famous for teaching his classmates and helping them with their studies.

Shange says his home environment is not good and he refuses to study with them.

“There are so many of us living in a shack that I would not be able to learn in such a situation. I want to learn and change the situation, to have a better home with us, '' said the Redeemer. He praised his teachers for their sharpness and said that his principal showed great confidence in them.

“I feel like I did a little too much and it was the work of the teachers I always bothered to help me with. Another is that I was teaching other students and then something came into my mind and I ended up singing it. He said he was determined to move on to higher education and his priority was to do Chemical Engineering otherwise Bcom Accounting.

He also mentioned that he was helped to avoid alcoholism, alcohol and drug abuse in the townships. He said he was always busy with his studies and did not have time to go up and down the street. He said he was also helped by going to church to pray and learn about morals.

Mhlengi's mother, Slindile Mntungwa, said she did not believe he had given birth to such an intelligent son and that he was praying that he would not change.

“We just do not know what to say and I am still amazed because the child is doing wonders and is coming back from overseas now with Maths. He became apparent in the lower grades receiving his certificates in competitions. Obviously he will be the answer in the domestic situation because it is very wrong, '' Ms Mntungwa said.

Meet King Monada and his first wife before he became famous