By EYRFM-NEWS (self media writer) | 23 days ago 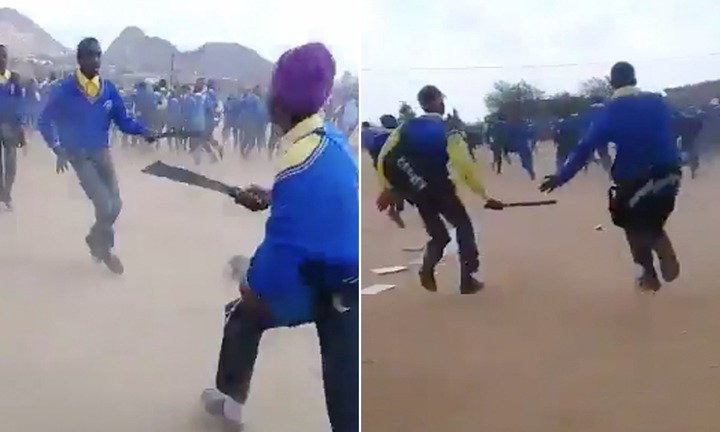 The situation at Umzinto school, Gobume High, is tense due to ongoing fighting between students.According to the source, there is little chance of writing the exams because the students were fighting with machetes and fighting with guns.

The Sun on Saturday saw one of the videos of students fighting on the school grounds. KwaZulu-Natal police spokeswoman Colonel Thembeka Mbele confirmed the shooting of a 16-year-old student on September 27.

Efforts to get the Department of Education to comment were unsuccessful until it was time to publish. According to one source, the argument was removed by a paper game.

"The boys were playing with paper after classes. The Mbabaleni boy, who had been robbed of his money, asked the boy from Standin KwaJeza to lend him R50 and hold his shoe so he could continue playing with the papers. Unfortunately he was robbed of R50. I can't give you my shoe without my R50. Bring my R50 and I will give you your shoe. '"

"The Clark boy then went to get the shoe from the boy at the Stage Jaeza, in the war but said he would not take it out without getting his R50. The Clark boy then hit the Stitch of the Jaza Stage, slapped them and they found each other up and fought."

Last Thursday, the KwaClark boys allegedly chased the occupants of the Jeza Tent with a gun and took them to Shembe's shop. On Monday, the Mbabaleni boys, armed with machetes and hammers, were waiting for the Stenden and the Stenden would enter with a bang.

"It has been reported that the cries of the children have been resolved," the source concluded.

It is alleged that the children had already attacked each other with machetes even on the school grounds. They also have epidemics in their neighborhood as they run with machetes to hurt each other.