Phoenix residents demand for principal to be fired 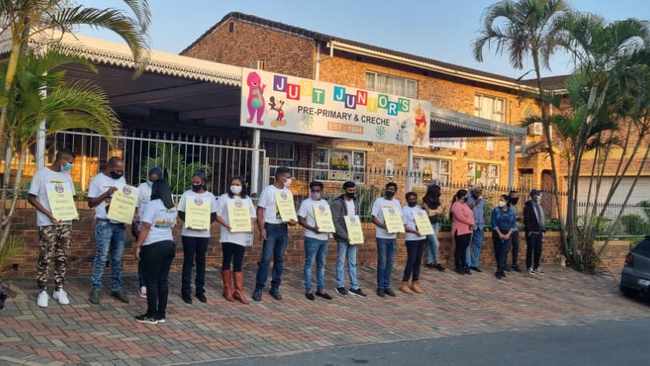 Durban - Phoenix occupants are requesting the evacuation of a crèche head after an instructor was gotten on camera kicking a baby. The educator has since been excused.

The kid hurt his brow, nose and mouth.

The kid's dad, Preshalin Pillay, told eNCA that he saw his kid's injuries when he got him from Just Juniors Academy Crèche.

"His brow was enlarged, and he had cuts on his nose. The instructor said he had harmed himself. She said she didn't have a clue how he got injured," he said.

Pillay said he took his child and left yet was not happy with the educator's reaction and returned to the school requesting to see film from the school's cameras.

Robot policing to be presented in areas of interest

He guaranteed the instructor was reluctant to show him, yet he persevered.

He said when he did ultimately see the recording, he saw his child was kicked.

Pillay said this was not whenever that his child first had gotten back home with wounds from school.

He said consistently, when his child was harmed, he was told he was playing or running when he got injured.

Pillay said they are requiring a full examination concerning what occurred on the day.

He affirmed that he had opened a case at the neighborhood police headquarters.

Pillay said he would not have his child return to the school.

He said it was upsetting that the individuals who should deal with kids are blamed for misuse.

The educator has since been excused for neglecting to report the occurrence.

KwaZulu-Natal Social Development MEC Nonhlanhla Khoza denounced the maltreatment and approached police to act quickly to capture the culprit. Khoza has dispatched a group of social laborers to the youth advancement Centre(ECD) being referred to examine the episode.

"It doesn't make any difference whether the ECD is secretly run, yet kid insurance is our obligation. Youngsters' privileges are contained in the Constitution. We won't endure any maltreatment of youngsters. We approach the law requirement organizations to make an illustration of individuals who misuse our kids," she said.

The Department will hang tight for the social laborer's report to figure out what steps should be taken against the foundation being referred to.

Khoza said the social specialists would meet with the guardians of the youngsters and the head of the ECD.