I slept with TSC officer for job

By KeepUpdated (self media writer) | 1 year ago

An unemployed qualified teacher has alleged that she was coerced into having sex with a TSC officer with the assurance to be granted a job, however, to her dismay the officer seems not keen to keep the promise anymore.

The ‘whistleblower’ teacher is now demanding her job as promised by the sex pest officer, who managed to have his way with her. The name of the teacher and the officer are known to this newspaper but will not be disclosed, at least for now. 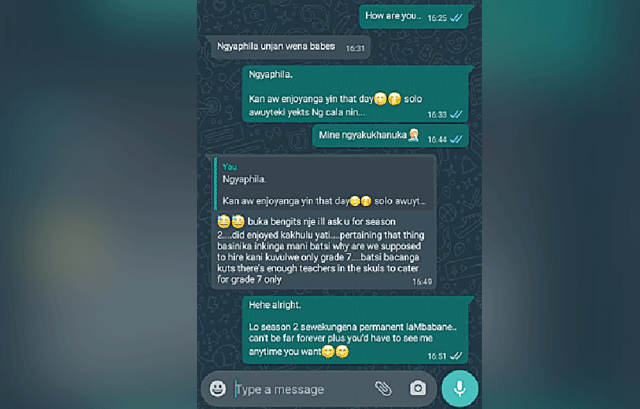 This comes amid a statement by Teaching Service Commission (TSC) Chairman Simanga Mamba in the past week that the teaching service is saturated.

This he said when he appeared before the Public Accounts Committee (PAC).

Mamba informed the PAC that they were still allocating permanent positions to teachers who had started working way back in 2010. The teacher in her late 20s alleged that she was confronted by the gentleman whilst at the TSC offices in pursuit of a teaching post.

She said they conversed and ended up exchanging numbers. She recounted that the officer once invited her for some drinks in one of the pubs in the capital city, where he fortified his intentions to sleep with her in exchange of a permanent post.

This newspaper can confirm that the officer was on Thursday afternoon confronted with such serious allegations and he confirmed such exist at TSC.

The officer first said it would be scarce to get a post at the moment, after the announcement by the chairman (Simanga) that posts have been exhausted.

He, however, promised to connect anyone seeking a job to people within the building who can speed up the process provided they brought some cash.

He even volunteered his contact details to call once those interested in the job had made up their mind.

This was in an effort to ascertain if indeed the officer was involved in the alleged selling of posts. Strangely, the allegations made by the teacher against the officer seemed to hold water, judging by the information he unintentionally volunteered to this newspaper.

The teacher alleged that: “He constantly called to assure me that he was doing everything in his power to tie up a post for me. Hence, I would also call to check if he was managing to tie up the deal. However, he changed tune as he then started inviting me to his house.

At one instance, he arranged that we meet at a lodge in the city but I managed to sneak away, I made sure that I did not upset him in our conversations as I desperately wanted the job.

Whilst avoiding his advances I lied that I had relocated to Shiselweni. That was after he had invited me to his house, insisting that I visited him.

He deposited money through my Mobile Money account so that I could come and visit him here in Mbabane.

Seeing that he was serious about the plan, I changed tune, and informed him that I actually live in the city,” said the teacher.

This reporter has evidence of a statement after the transaction was processed on August 28, 2020 by the alleged officer to the teacher.

These were some of the officer’s alleged efforts to lure the teacher to his house.

The Sunday Observer is also in possession of WhatsApp messages between the two, where the officer allegedly made advances to the desperate teacher.

After numerous advances, the teacher confirmed that she eventually gave in to the sex pest officer’s sexual advances and slept with him.

After the alleged sexual encounter, the teacher is now pleading with the officer to keep his word as she had fulfilled her part of the deal. The officer allegedly responds by assuring the teacher that he was still working on getting her the post.

However, the teacher alleges that the reason she resorted to exposing the officer was because he was now ignoring her calls. Explaining her reasons for surrendering her body the teacher indicated that she was desperate for a job as she has stayed unemployed for a long time.

She highlighted that upon realising that the officer was shying away from her, she was heartbroken.

She alleged that each time she asked the officer about the job, he would tell her to be patient or not respond to her calls.

She would at times ask the officer if he had not enjoyed the sexual encounter or he wanted more of it.

“I am not happy with the way this officer has been ignoring me. I did not approach him but he did whilst I was at the offices to seek for a job.

He said he could assist me only if I slept with him. He fetched me from home and took me to his house in one of the suburbs in Mbabane. I am not trying to tarnish this man’s image I just want him to keep his promise as I did,” said the teacher. In a proposed meeting with the officer, he denied ever selling posts or promising the alleged teacher any post. He insisted that he was only employed as a junior clerical officer responsible for filing. He blamed the teachers for perpetuating the corruption, saying some made advances towards male staff with the hope that they would do them favours.

He mentioned that female teachers make advances on male staff at the TSC.

He also disclosed that it was not only unemployed graduates bothering them with jobs but even those hired in remote areas did the same.

He said some would want to be transferred to a school in the urban areas and promise anything in return.

“I find it odd that I could promise a teacher a post yet I am not the one dealing with the hiring of teachers. I only advise them with what they may need when applying for a post.

It’s true we meet different ladies and one can be tempted to court them but not in exchange for a job.

Yes, I can confirm that some teachers would come back after being hired and confide that they were helped by a certain person, at a fee though,” said the officer.

Some unemployed teachers shared that they were so desperate for jobs that they opted to take any job offers rendered to them.

'Is This A New Trick? Check How Mozambicans Tried To Smuggle This Bakkie And Got Caught By SANDF.