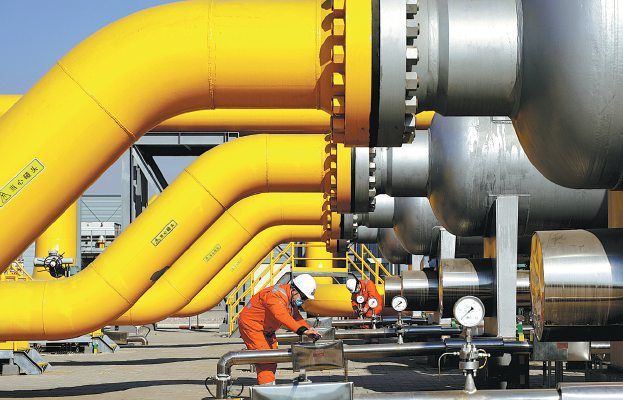 China's diversified gas import sources and the prevalence of long-term contracts are likely to put the brakes on surging gas prices in the country, experts said.

Driven by growing demand, economic recovery from the COVID-19 pandemic and loose US monetary policy, Asian liquefied natural gas or LNG prices, natural gas futures in the US and European natural gas prices have all been rising aggressively since June.

According to the National Bureau of Statistics, LNG prices rose 10.2 percent in August year-on-year, reaching 5,402 yuan ($837) per metric ton. The LNG composite price was around 2,500 yuan per ton last year.

National average delivered LNG prices in China rose 60 percent in August compared to March, according to figures released by BloombergNEF.

Inflated global prices for natural gas, mostly for spot LNG, lifted domestic gas prices and costs for many Chinese industries during the past few months. However, natural gas prices are unlikely to continue surging in the months to come as LNG spot prices will have little room for further growth, said Luo Zuoxian, head of intelligence and research at the Sinopec Economics and Development Research Institute.

While rising LNG spot prices in major global consumption markets will curb supplies in China and push up prices, much of the LNG supply is purchased under long-term contracts and is less likely to be affected by current volatile spot prices, Luo said.

"China is unlikely to face a serious impact in natural gas as China's LNG import sources are diversified, and the country's numerous major gas pipelines are not operating at full capacity yet, including those that link Russia, Myanmar and Central Asian countries, all of which could help balance the growing cost of LNG imports in China when necessary," he said.

Liu Yijun, a professor at the China University of Petroleum, said that if the domestic economic trend continues and the global political environment remains stable, oil and gas prices won't be subject to too many fluctuations.

China's natural gas imports reached 59.82 million tons in the first half, up 23.8 percent year-on-year with much of the increase coming from LNG. The import value rose 9.5 percent to 136 billion yuan and the average price of LNG imports rose 39 percent year-on-year, said the National Bureau of Statistics.

The blistering growth of the country's LNG imports over the first six months highlighted the importance of the fuel in the country's energy mix amid efforts by China to peak carbon emissions by 2030 and achieve carbon neutrality by 2060.

An analyst believes while natural gas does not have too many advantages in terms of reserves compared with coal, and is not as clean as new energy including solar and wind power－which puts it in an awkward position in the energy mix－the "bridging role" of the super-chilled fuel has a more important role than ever with the government aiming to achieve carbon neutrality by 2060.

Gas is expected to play a positive role in decarbonization due to lower emissions compared to coal, said Li Ziyue, an analyst with BloombergNEF.

"China has already been reducing carbon emissions by replacing coal and oil usage with natural gas in select applications such as heating and heavy duty commercial vehicles, as the government wants to increase the share of natural gas in the primary energy mix to 15 percent by 2030 from around 8 percent in 2019," Li said.

"Increased natural gas usage at the expense of coal and oil will help reduce China's carbon emissions and the emissions intensity of natural gas can also be lowered substantially with carbon capture, utilization and storage, or CCUS technologies," she added.

CCUS, a process that captures carbon dioxide emissions from sources like coal-fired power plants and either reuses or stores it so it will not enter the atmosphere, is expected to result in a 14 percent reduction in carbon emissions by 2050 and will likely have broad market prospects, according to the International Energy Agency.

"A combination of these approaches, including the application of biomethane and hydrogen－a crucial next step to enable long-term climate goals to be reached－will help the natural gas industry to evolve and deliver low-carbon growth," Li said.

According to a recent report by BloombergNEF, gas supplies have been rising to meet peak power demand and reduce carbon emissions from coal, especially in coastal provinces with the highest gross domestic products.

Average gas power generation in Guangdong, Jiangsu, and Zhejiang－the top three provinces for gas power installation capacity－rose by nearly a third in the first half compared with a year earlier, said Cao Lujia, an analyst with BloombergNEF.

According to BloombergNEF, with earlier plans to increase gas plant utilization, Zhejiang province recorded a 75 percent jump in gas power generation amid a strong push from the local government to secure peak power supply and reduce carbon emissions from coal.

Zhejiang used 2.1 million tons of natural gas for power in the first six months, although this was still only half the amount consumed in Jiangsu province over the same period.

Gas generation in Guangdong climbed 38 percent to meet an overall growth in power demand and counter a steep drop in hydropower supply from neighboring provinces. However, this upward trend is being curbed by recent high LNG prices, it said.