Pink diamonds seem to have gained a lot of popularity recently, with many such gemstones being sold for eight figure sums in the past few years. A great example of this is the aptly-named Perfect Pink, which went for over $23 million in November 2010.

The 14.23 carat diamond is quite a rarity according to Christie’s, who only sold around 20 such pink stones over 10 carats in almost 250 years of history. 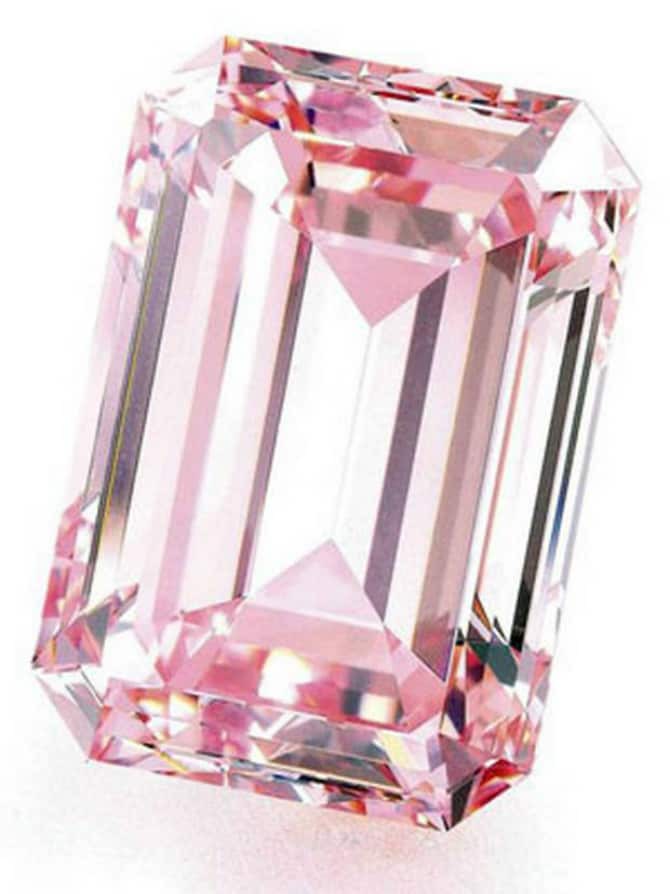 The Winston Blue is an extremely valuable ring featuring the largest flawless vivid blue diamond in the world, which was auctioned by Christie’s in May 2014.

The stunningly beautiful 13.22 carat piece was acquired by Harry Winston, and named in honor of the company’s legendary founder by its CEO, Nayla Heyek. The price of the deal was a hefty $23.8, far exceeding expectations (as it often seems to happen when people try to outbid each other for these things). 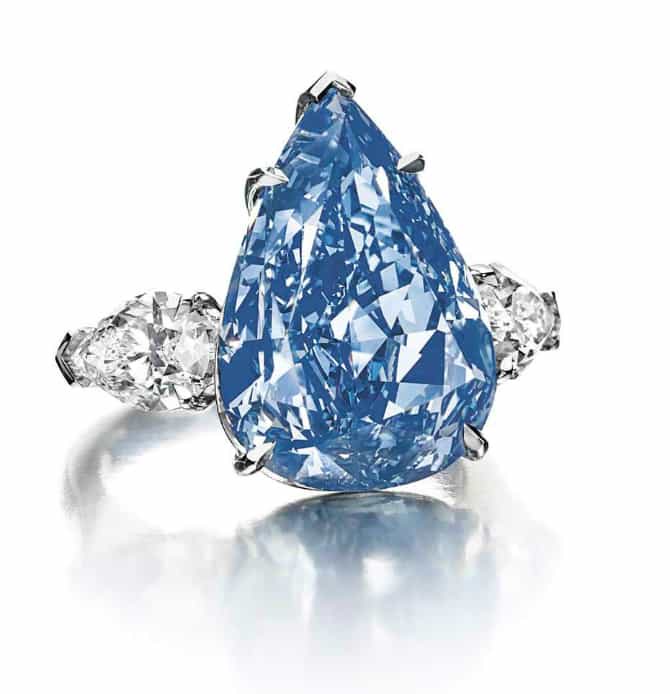 The Wittelsbach blue diamond is one of the most prestigious gemstones in the world. With a history going as far back as the 17th century, it was part of the Bavarian crown jewels before disappearing for decades during the 20th century. It finally reappeared and was subsequently bought at an auction by Laurence Graff for over $24 million.

The legendary jeweler then proceeded to recut the stone, reducing it from 35.52 carats to a little over 31 carats, thus improving its clarity, brilliance, and grade. This move has proved to be quite controversial, being compared to painting over a masterpiece by Rembrandt or Da Vinci in order to make it “prettier.” 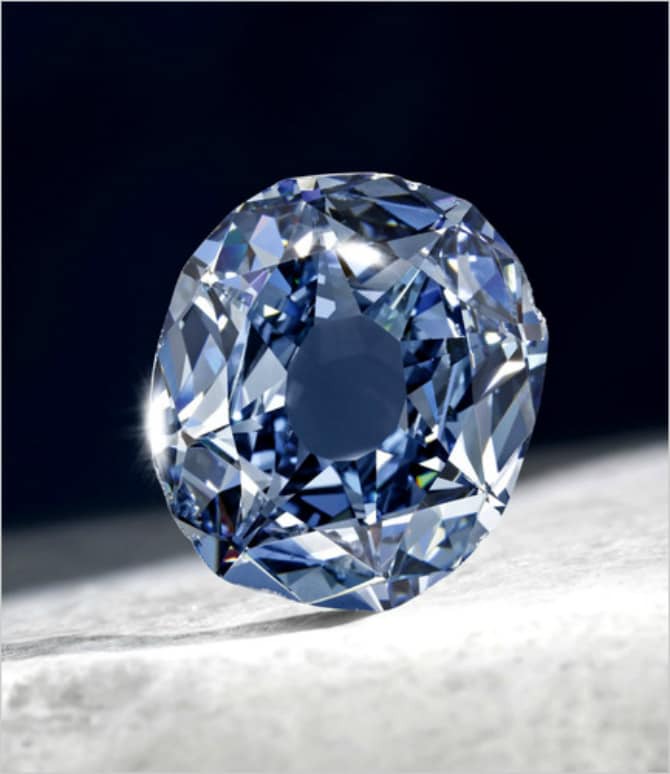 The Hutton-Mdivani Necklace by the Cartier Collection is a magnificent piece valued at a staggering $27.44 million.

It comprises 27 large jadeite beads of splendid color, with diameters ranging from 15.4 mm to 19.2 mm, and once belonged to the famous socialite Barbara Hutton, daughter of retail tycoon Frank W. Woolworth. The beautiful necklace, mounted by Cartier with a beautiful ruby and diamond clasp, was a wedding gift for her first marriage, in 1933, to Prince Alexis Mdivani. 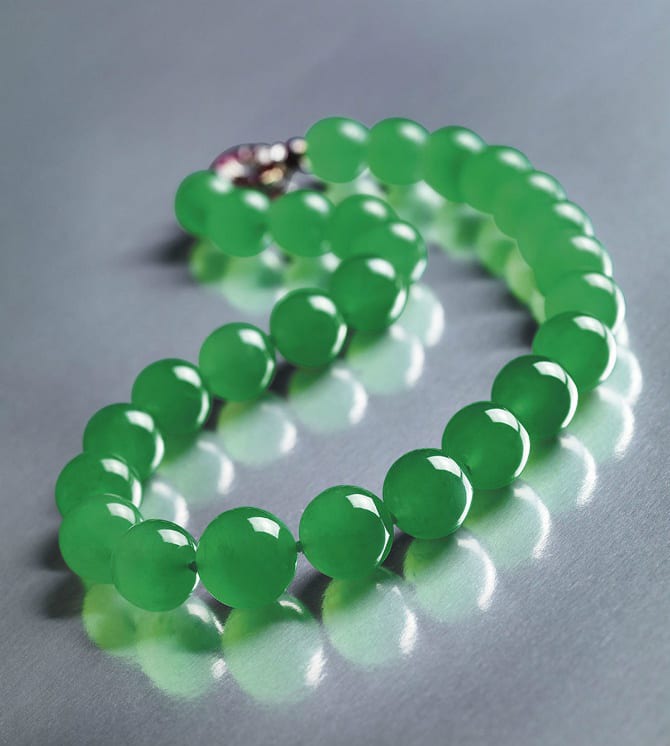 When it was auctioned by Christie’s in Geneva in November 2013, this incredible stone, simply referred to as The Orange, was by far the largest fancy vivid orange diamond to be sold this way. Unsurprisingly, it fetched a record-breaking bid as well, which rose to an amazing $35.5 million, blowing its estimated value of $21 million out of the water.

At almost $2.4 million per carat, this eye-catching gem also set a world record price per carat for any colored diamond sold at auction. 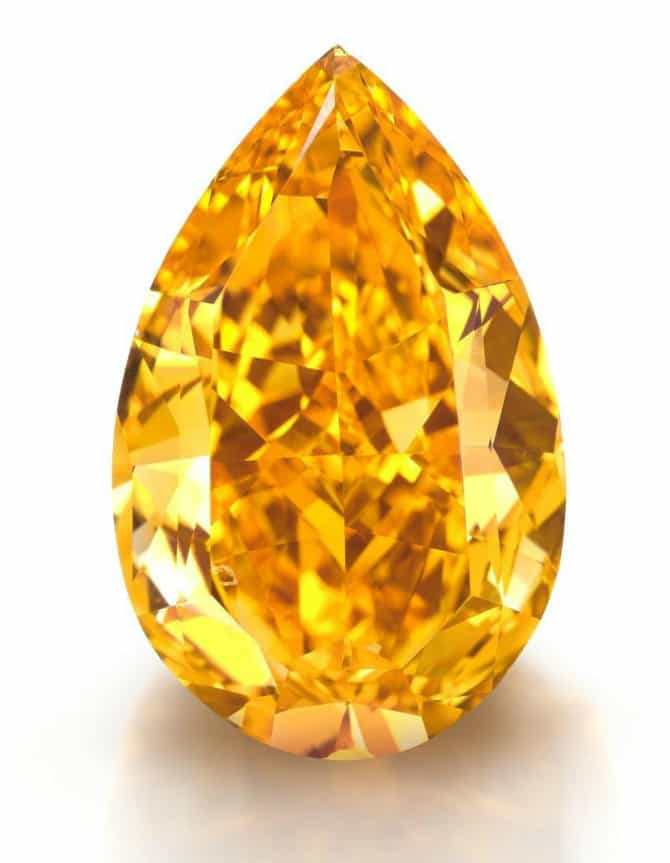 Graded “Fancy Intense Pink” by the Gemological Institute of America, this 24.78-carat emerald-cut stone was bought at auction by none other than Laurence Graff himself, who described it “the most fabulous diamond I’ve seen in my career.”

What makes this diamond so amazing is the combination of color and purity with the elegance of the emerald-cut, which is usually reserved for white diamonds – rare features which greatly raised the stone’s allure. 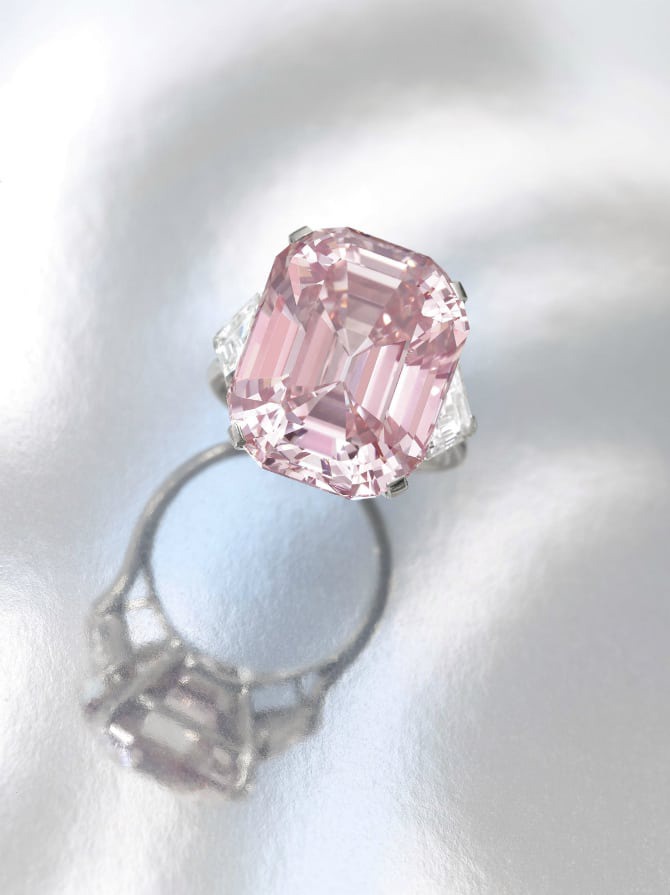 The impossibly expensive L’Incomparable Diamond Necklace was unveiled by the internationally acclaimed Mouawad jewelry company and still has the honor of being the most valuable piece of its kind in the world.

In an incredible stroke of luck, this jaw-dropping gem was discovered by chance by a young girl in the Congo three decades ago in a pile of kimberlite (a by-product of diamond mining). Its centerpiece is the world’s largest internally flawless diamond (which is a massive 407.48 carats!), but the necklace also features no fewer than 102 smaller stones. 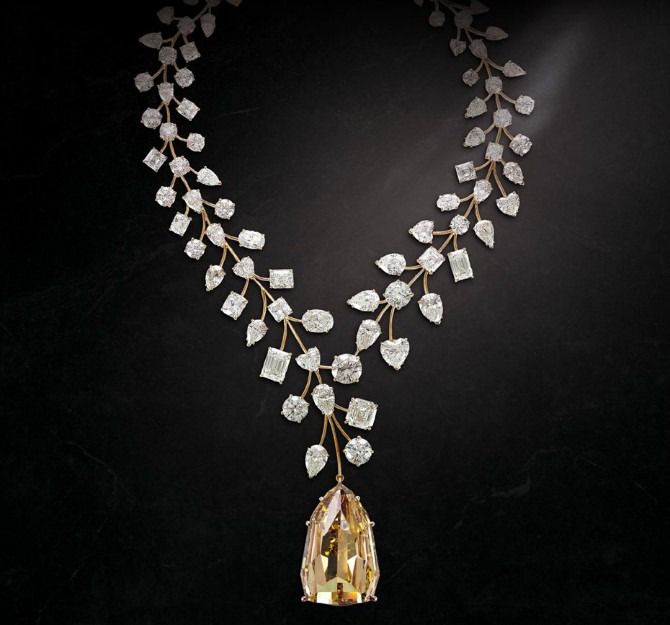 Rarely is a gemstone of its quality and value available for purchase, so when Sotheby’s auctioned this impressive 59.60-carat diamond called the Pink Star in late 2013, you know buyers with very deep pockets would line up to acquire it. In fact, interest for the diamond was so great, the final bid far exceeded the estimated $61 million it was expected to fetch, and actually rose to more than $83 million.

Unfortunately, the buyer couldn’t come up with the record-breaking fee in time, so Sotheby’s has retained the stone, valuing it at $72 million. 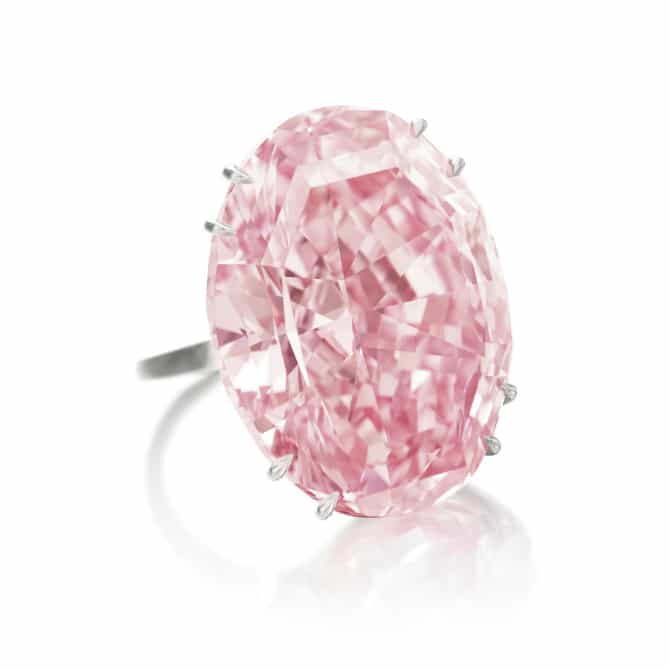 In the world of diamonds, there’s no one bigger than Graff – so to once again highlight their status, the London-based company has created this staggeringly expensive Peacock brooch, which is worth more than a private jet!

The piece boasts over 1,000 gemstones (1,305 to be exact), weighing in at 120.81 carats, with the deep blue diamond at its heart tipping the scales at just over 20 carats by itself. Certainly not intended to be worn (at least not in public), unless you actually get a kick out of having the GDP of a small nation on you when you go out. 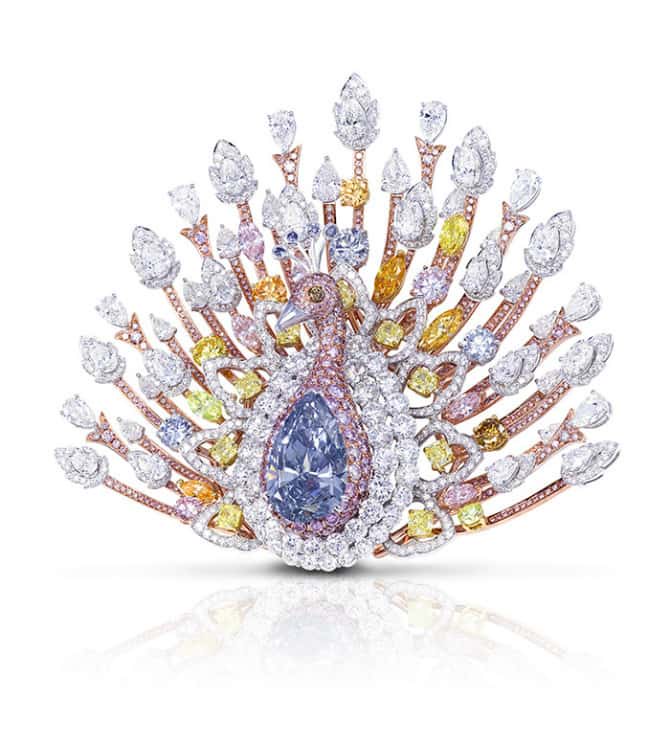 One of the most infamous pieces of jewelry in history, the Hope Diamond is legendary not only for its great beauty, but also for allegedly being cursed.

Over the centuries, it was in the possession of the likes of Louis XIV and Harry Winston, with the latter donating it to the Smithsonian Institution in 1958, where it has been on display ever since.

The mesmerizing, 45.52-carat deep-blue diamond has been valued in the hundreds of millions; however, according to the Smithsonian, its rarity, extremely high profile, and immense cultural value make its worth ultimately inestimable – and we’re inclined to agree. 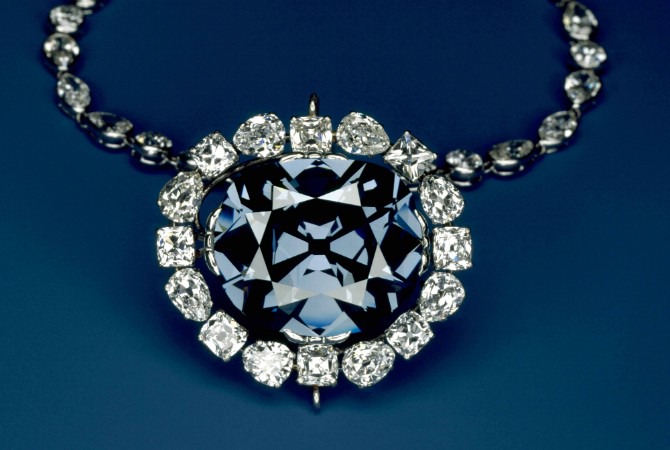