Figures revealed| see how much the Guptas defrauded SA

By _Heavenly (self media writer) | 4 months ago 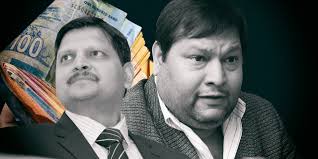 Former Government Communications and Information System (GCIS) CEO Mzwanele Manyi has come out to defend himself for dishing out millions of rands worth of advertising to the Gupta-owned newspaper, The New Age.

The former GCIS CEO, said the his decision to support to support community and small media, and new initiatives like the Gupta-owned newspaper was a government policy to promote media diversity.

Manyi made the remarks in a detailed statement responding to the first part of the state capture report handed last week to president Cyril Ramaphosa. Part of the more than 870 page report found the former CEO, to be an enabler of state capture during his time as GCIS boss.

"It is unfortunate though that the report didn't point out specific wrongdoing in what it termed enablement". He added.

According to the report, the now-defunct Gupta-owned newspaper received more than R32 million in advertising spend and sponsorships from the GCIS.

1. In 2011, the entity paid, The New Age R6.3 million despite the newspaper having no clear evidence of readership and circulation figures.

Content created and supplied by: _Heavenly (via Opera News )