Here Is Why Government Needs To Implement The Basic Income Grant

By HotNewzz (self media writer) | 20 days ago 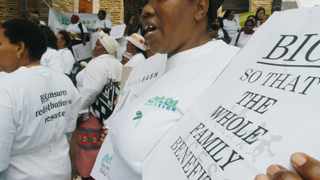 Campaign movement Cry of the Xcluded has called on the government to look into progressively introducing an unconditional universal basic income grant (BIG).

The call by Cry of the Xcluded, which was launched by Saftu, Amcu and the Assembly of the Unemployed in February, was made two days before Finance Minister Enoch Godongwana tabled the medium-term expenditure framework.

Addressing a media conference on Tuesday, Saftu general secretary Zwelinzima Vavi said people without a stable income aged between 18 and 59 should receive a BIG from the state.

“We demand a basic income grant of R1 500 that meets the immediate living needs of the unemployed,” Vavi said.

He also said the proposed BIG would boost the economy, create demand for products and services, and thus create many jobs.

SACP calls for universal income grant for the unemployed

How to apply for R350 grant

“The government must focus on attracting the people back into the economy instead of just foreign investors.”

Vavi noted with the municipal election now gone, the money put aside for local government was being slashed.

“With even less money provided to the local government from the national government, municipalities will be forced to increase the prices of rates, water and electricity. More people will be excluded, service delivery will get even worse, and we get closer and closer to a climate disaster.”

He also said although the government has cut spending, it lowered taxes for corporations.

“This means the rich will get even richer, because they pay less taxes. This also means even less money for the government to spend on public services,” he said.

Vavi said they were tired of empty promises.

Amcu Assembly of the Unemployed Saftu

South African Vow not to support Ramaphosa again After He Made these declarations.

These Politicians are to be blamed for the missing R500 billion, Pravin Gordhan Exposed Top leaders.

Surprising as ANC members want to step down from office over Unpaid November Salaries.

OPINION: DA Being The 2nd Must Accepted Party, They Can Win The Presidential Elections By Doing This