By RadioSpace (self media writer) | 6 months ago 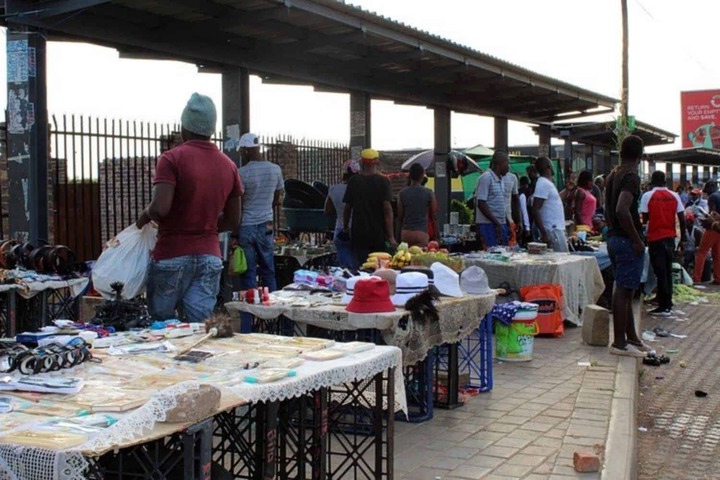 Immigrant traders were forcibly removed from the Bara Taxi Rank in Diepkloof by a group known as Operation Dudula.

Immigrant vendors in Johannesburg claim they have been operating their stalls in fear of being attacked by a xenophobic organization, putting their safety and livelihoods at risk.

The SAITA (South African Informal Traders Alliance) has called on the government to intervene.

“There are many foreign workers. They are our colleagues. Who gives anybody the right to harass and psychologically torment our colleagues?” asks Rosheda Muller, SAITA president.

The alliance, which represents over two million informal traders across South Africa, expressed concern about recent intimidation of immigrant traders in Johannesburg.

Immigrant traders were forcibly removed from the Bara Taxi Rank in Diepkloof, Soweto, by a group known as Operation Dudula ("push away" in isiZulu).

Muller believes that the state and the informal sector should work together to find a solution.

Many more people, according to Muller, are now reliant on the informal economy to make a living. In the third quarter of 2021, the official unemployment rate was 35 percent, according to Statistics South Africa's Quarterly Labour Force Survey.

A lack of trading places has also generated a rift among traders, according to Muller. She advocated for the opening of more markets and the implementation of rules.

Trader harassment began in Soweto and quickly expanded throughout Gauteng, including Rosettenville and Turffontein.

GroundUp met with a resident of Soweto who was involved in Operation Dudula.

The individual, who requested anonymity, claimed that he just joined the movement because foreigners are given opportunities that locals are not.

“Our own people are suffering and jobless. When you get into a taxi and go to a shop, you are driven and served by a foreigner. Why are these jobs not given to our people?” he asked.

Some vendors outside the Jabulani Mall in Soweto told GroundUp that they are working in terror after hearing of a social media call to action against immigrants.

“We heard that on 22 January, Operation Dudula would be coming to Jabulani. For about four days, I did not set up my stall because I was scared they would come and take my stock,” said a woman who has been trading since 2013.

She sells socks, hats and wooden spoons to support herself and her two children.

“The money I lost on those days affected my ability to put food on the table. I have set up my stall now but I am still scared because they [Operation Dudula] could come at any time,” she said.

"We can't even run into the mall for safety," a Zimbabwean trader explained, "because if there is any noise outside, the mall will close and the gates would be locked." We've been fearing going to work."

According to Pat Horn of Women in Informal Employment, the municipality's reluctance to police informal trading legislation is a key cause to tensions between South Africans and immigrants.

“A lack of equal treatment and compliance creates fertile ground for bribes, where people who pay [officials] get better treatment,” Horn said during an online discussion hosted by SAITA on 25 January.

The Public Space Trading Guidelines for Local Government were published by the South African Local Government Association (Salga) last year. These rules are intended to assist local governments in carrying out their responsibilities on public-space trading.

Provisions for the participation of the voices of South African and immigrant traders in decision-making are included in the suggestions.

This must be "driven by bottom-up ways to respond to real needs" in the informal sector, according to the guidelines.

Muller expressed her satisfaction at Salga's presentation of guidelines for local governments and expressed her hope that they will be followed.

The City of Johannesburg told GroundUp that it is amending its Informal Trading Policy in response to issues about harassment of immigrant traders. The city stated that it would consider Salga's suggestions.

“There are plans to expand trading spaces to accommodate the fast-growing informal trading sector.

“There are also new taxi ranks, such as Johannesburg International Transport Interchange and Florida taxi rank in Roodepoort, that are going to accommodate traders. The City is in the process of allocating traders at Jabulani traders market at Jabulani Mall,” said the City.

In response to immigrant traders' worries, the City said the Joburg Metropolitan Police Department, which is in charge of enforcing City regulations, will ensure that "traders granted places in designated [areas] will continue to trade without being harassed or attacked by anyone."

Content created and supplied by: RadioSpace (via Opera News )

SAD: This Lady Abducted 3 Children For Child Trafficking, Check Out How She Was Paid

If you consistently wash your face with salt water for a month, This is what will happen