By Confidence's_News (self media writer) | 5 months ago

As we all know the Zulu king funeral was regarded as a National interest so it had to be attended without any disturbance. Eskom spent R8.5m to suspend load-shedding for the memorial service of King Goodwill Zwelithini which was held in March.

This was revealed later on, in awritten reply to parliament by public enterprise minister Pravin Gordhan who said the government considered the memorial a national interest.

The memorial took place in 18 March and by the Eskom was on level 2 of rolling blackouts of its load-shedding across the country.

Pravin gordhan stated that the government made a request a day before the memorial service for Eskom to consider suspending load-shedding for a duration of four hours between 10:00 and 14:00.

“The system operator evaluated the request and concluded that this was technically possible without putting the power system at risk and would not result in a higher stage of load-shedding either before or after the memorial service,” Gordhan said in response to a parliamentary question by the DA’s Kevin Mileham.

King Zwelithini was given a special burial memorial by the ANC/RSA president Cyril Ramaphosa who also ordered flags fly at half-mast. The funeral was held in private and attended by close relatives. The memorial was held at the KwaKhethomthandayo Royal Palace a day after his burial.

The load-shedding was successfully suspended for the duration, Eskom dispatched four additional open cycle gas turbines (OCGT) from 9.42am until 2.10pm.

“Furthermore, pumped storage generation was dispatched and supplied an estimated additional 2,240 MWh with a maximum additional capacity of 626MW dispatched.  Between 12:00 and 14:00, four coal-fired generators returned to service adding 1,935MW of capacity to the system, although it takes many hours to ramp these generators to their maximum capacity.

Some of the considerations were that there would be no need to increase the stage of load-shedding from level 2 before and after the memorial as it took place in the late morning and early afternoon “when there was a reduction demand”.

Pravin gordhan stated that load curtailment of industrial customers would not be suspended. 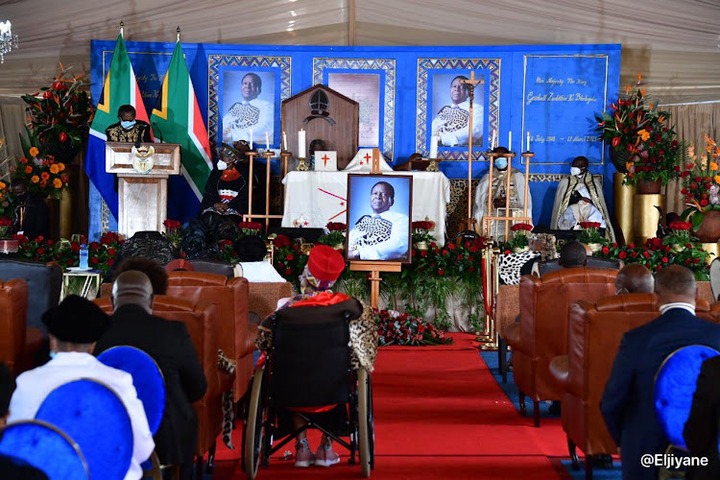