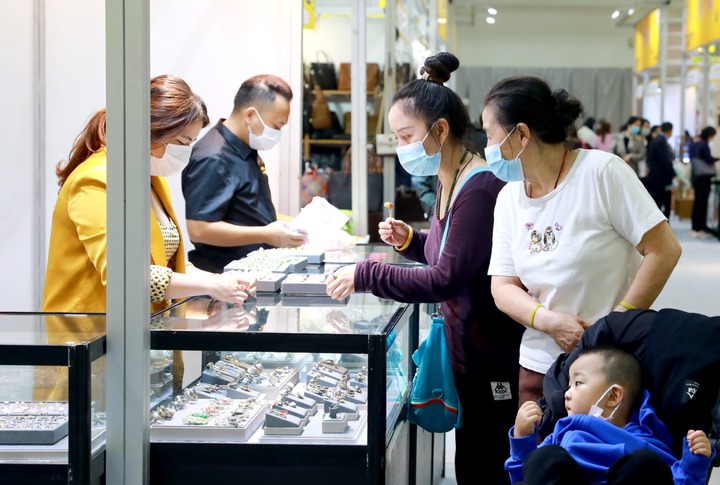 Visitors buy jewelry at the 13th China-Northeast Asia Expo, which is being held in Changchun, Jilin province. [Photo by WANG ZHENDONG/FOR CHINA DAILY]

China's economy continues to feel the effects of the ongoing COVID-19 pandemic with a sharper-than-expected slowdown in July as the Delta variant disrupted supply chains and undermined consumer confidence.

Pandemic shocks and aftershocks make the outlook more uncertain than usual, but longer-term consumption prospects appear to remain robust. The sheer scale of China's consumer markets, coupled with the rapid rise in incomes, points to consumption growth potentially worth $5 trillion in the period to 2030, according to new research from the McKinsey Global Institute.

A huge change is underway. Consider that today China is home to fewer upper-middle-income households with annual incomes of $22,000 and above in 2011 international dollar terms in purchasing power parity than the European Union. But in just a decade's time, China could account for almost as many as the European Union and the United States combined.

However, China's consumption story is evolving. Rising incomes still matter, but the primary feature of the next decade may very well be the impact of sweeping demographic and social change that is coinciding with the rapid march of technology. To find the consumers who will drive China's growth, you need to look at very different groups of individuals.

So who are the consumers who are key to growth? We highlight five consumer shifts that matter.

The size of the average household in China has shrunk by almost 30 percent over the past 20 years, reflecting falling total fertility and the fact that people are tending to delay marriage and have children later－three years later－among other influences. Today, between 15 and 20 percent of Chinese households are single-person ones, more than double the share in 1999. The number of single adults has now topped 240 million, and they are driving a robust singles economy. Reflecting the rising prevalence of singles, for instance, pet ownership in China has more than doubled in just five years. Catering to people exercising and even entertaining themselves alone, there are now one-person gym modules and mini karaoke booths in China.

Consumption by people aged 60 and over is expected to grow at about double the rate of the population as a whole over the next 10 years, and an increasing share of their spending will be online－at least two-thirds by 2030. Because so many elderly were housebound during the pandemic, this trend has accelerated. By the end of 2020, China's over-60 crowd accounted for more than 11 percent of the country's internet users, almost doubling their share in only nine months. Ali Research reported that the number of seniors' monthly average users of one of the largest e-commerce platforms in China grew year-on-year about 30 percentage points faster than other age groups in 2020. Chinese technology companies, including Baidu, Didi, Taobao and JD, are all rolling out senior-friendly apps.

So-called "digital natives" born between 1980 and 2012, including members of Generation Z and millennials, already account for over one-third of Asia's consumption, and that is expected to increase to 40 percent by 2030. Twenty-nine percent of Gen Zers in China spend more than six hours a day on their mobile phones, voraciously consuming video content. This is a generation that is confident in their financial futures, and this is reflected in a willingness to borrow in order to spend. Half of all consumers taking out consumer loans are younger than 30.

The personalization of goods and services is spreading across industries, fueled by the enormous amount of data being generated and analyzed to home in on what consumers really want. Chinese consumers are relatively willing to share their data in order to get the goods and services they want－47 percent, compared with less than 30 percent in France, Germany and the United Kingdom, for instance.

Asia is on the front line of climate risk, accounting for two-thirds of the global risk of economic disruption emanating from changes in the natural world. In an Ipsos poll conducted in late 2019, 85 percent of Chinese respondents said that they had made changes to the products and services they buy because they were concerned about climate change, the fourth highest reading out of 28 countries surveyed.

As companies respond to the diversifying consumer landscape with new offerings and business models, many of them enabled by digital technologies, new types of consumption curves are emerging. In the past, consumption of many goods and services tended to follow an S-curve, which rises slowly at the start before climbing steeply once income levels are high enough and then hitting a plateau. Now, in some instances, consumption curves are becoming flatter as technology enables people with lower incomes to have access and afford the goods and services they want and new categories of consumption unfold due to changes in regulation and consumer behaviors.

Take the automotive sector as an example. The penetration of car ownership follows a well-established S-curve. However, new ways of accessing mobility such as ride-hailing are much less dependent on income because consumers who cannot afford to own a car can still have access to private vehicles, and prices are therefore no longer a barrier. Although China lags many higher-income countries on car ownership, it has one of the highest rates of ride-hailing penetration. In part as a result of the explosion of new forms of mobility in China, private vehicle sales in China may hit their peak in the next five to 15 years.

A new market could emerge and there could be reshuffling of the competitive landscape. By 2030, 60-80 percent of vehicle sales in China are expected to be new energy vehicles or hybrid vehicles. As digital natives continuously embrace digital ecosystems and new channels, the expectations of what a car can do are changing, and in an era of commercialized hardware, automotive players may consider how to radically revamp customer experiences. A new McKinsey survey suggests that 56 percent of consumers are willing to switch brands for improved connectivity. Chinese players rank highly compared with international OEMs－original equipment manufacturers－on providing customer experience through advanced connectivity solutions, like advanced human-machine interfaces and integrated apps through partnerships with local tech players. This opens up new revenue streams and enables automotive companies to shift from one-time sales to ongoing revenue models and a proliferation of value-added services.

The sheer scale of China's consumer market and rising incomes remain key considerations for companies seeking to thrive in this market. But, increasingly, the key to success is to understand the radical changes underway and the increasing diversity of China's consumers.

The writers are researchers with global management consulting firm McKinsey&Co.

The views don't necessarily reflect those of China Daily.