By Anthology (self media writer) | 11 days ago 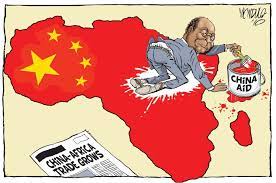 Africa has become the fastest urbanization region, with rural migrats moving into cities at a rate which has even surpassed China and India. The transition presents us with challenges however there are also big records for countries that are willing to risk billions in an infrastructure. It is estimated by 2050 that Africa's population will have doubled and most of its growth is said to be happening in urban cities. The population in Lagos alone is growing by 77 people per hour. Acording to Mckinsey Institute by 2025 more than 100 cities in Africa will have a population of opver a million people.

With growing urbanization comes with many unprecedented economic opportunities. The IMF recently declared Africa as thesecond fastest growing region, and it's predicted to become a 5 trillion dollar economy. The attention of the world is now drifting towards Africa with comparisons to 1990s era China. However with China with being interested in investing in Africa comes with reprecussions. While China has made contributions to the economy of Africa it comes with some strings attached as most African countries have fallen to Chinese debt trap. China has loaned African countries over a 153 billion dollars for over the last two decades. This debt trap has made many African countries very vulnerable as it has now opened up their borders for more exploitation of nations resources aloowing investors from China to buy out the major companies within the nations and only having wealth for themselves.

Unfortunatley the issue has been touched on however it does not get mainstream coverage.

Content created and supplied by: Anthology (via Opera News )

If You Sweat A Lot, Here’s How To Make Yourself Smell Great (Method 1 of 3)