From the poorest currency, to be top of the richest currencies in the world. China flourish.

By Gandia (self media writer) | 1 month ago

Born into a poor rural family with per capital disposal income of less than 50 yuan ($7.80), the PRC, now in its 70's, has seen the income reading top 32,000 yuan as of 2020. Behind the 640-plus fold surge is the country's rapid ascent to a global behemoth in almost every aspect in an unparalleled time frame and path.

What are the CPC's secret codes to economic success? To answer that, the Global Times conducted an extensive examination of the CPC's economic policy making at several critical junctions and interviewed domestic and foreign experts. Four key themes stand out.

"The five-year planning is the major driving factor that boosted the Chinese economy to the No. 2 in the world. This system is effective and reliable in focusing on and predicting how the economy performs and which necessary adjustments are required to fine-tune it along the way," David Monyae, director of the Center for Africa-China Studies at the University of Johannesburg, told the Global Times. Since its beginning in the 1950s, there have been 14 five-year plans (FYP) - each marks a significant shift in China's economic policies and advances in social and economic development.

The first FYP, which started in 1953, envisioned the industrialization of China, starting the 60-plus year journey of creating an economic constellation that's being renovated every five years.  "China has led a different path than the West's laissez-faire capitalism or its so-called marketization. China maintains more compelling institutional prowess than the West," said Cong Yi, dean of School of Marxism under Tianjin University of Finance and Economics, citing the Party's strong ability to make strategic development plans that integrate short-term plans into medium and long-term ones.

After initially drawing on the Soviet Union's five-year planning experience, the CPC soon realized the limitations of the Soviet model and some of its shortcomings and mistakes, and then decided to independently explore a socialist construction road suited to China's national conditions, which, coupled with laser focus and effective execution, led to one milestone after another, Cong said.

The 13th CPC National Congress in 1987 made a proposition of a three-step development strategy that envisaged doubling the gross national product (GNP) between 1981 and 1990, doubling its GNP again by the end of the 20th century and per capital GNP reaching moderately developed country levels by the middle of this century. Buoyed by unprecedented reformist drives since the country's grand reform and opening-up in 1978, the second-step target was hit at the conclusion of the Eighth FYP (1991-95), five years ahead of schedule.

In yet another milestone, the Third Plenary Session of the 14th CPC Central Committee in November 1993 passed the decision on certain issues in establishing a socialist market economic system. With the guidance of the Ninth FYP (1996-2000), the country made good the transition from a planned economy to a socialist market economy in 2000, a prelude to its accession to the WTO in December 2001. In the latest proof of the effectiveness of the FYP, just as planned, the alternation of the 13th FYP ended 2020 and the newest FYP starting this year is on course to deliver a victory for its first centenary goal of building a moderately well-off society on the CPC's 100th anniversary. "The main feature of the five-year plans is the top-level design, which is holistic, macroscopic, forward looking, anticipatory and binding," Zhao Xuejun, director of the Modern Economic History of China Research center under Chinese Academy of Social Sciences (CASS)' Institute of Economics, told the Global Times.

Today, China's FYPs have become a closely watched policy document around the world as it provides a valuable window into China's economic policies and development goals. This year, global attention was focused on the 14th FYP ending 2025, which is set to pave the way for the second centenary goal to be attained - building a modern socialist power by 2049 when the PRC turns 100.

However, even as China's economy advanced in an overall steady pace as planned, there were no shortages of difficulties and mistakes over the past several decades - from some early decisions and policies that were against market rules to the "decade of the catastrophe," to the blind pursuit of extensive and high-speed growth over a certain period of time. In overcoming those challenges and mistakes, the CPC showed its ability to "seek truth from facts" - a phrase that epitomizes the Party's flexibility and ability to objectively pinpoint the problems, experts said.

That ability was highlighted in the Party's response to crises during the Great Leap Forward era, which coincided with the Three Years of Natural Disasters (1959-61) and the breakdown of Sino-Soviet Union relations. During the period, exaggeration about production prevailed across China, being called "launching satellites," and from wheat, rice and steel, places and reports started to boast of false high productions. The economic and social campaign that aimed for a rapid industrialization to steer the-then poor economy into a modern communist society appeared to have wrong-footed the economy.

Instead of turning a blind eye to the truth, the CPC Central Committee urged maximum efforts to correct all deviations in an urgent instruction letter in November 1960 and a Party plenum in January 1961 decided on the implementation of an economic adjustment. As the economy ran its course of adjustment at the end of 1965 and began its third FYP, the Cultural Revolution began, putting the country in "10 years of catastrophe" until 1976.

Then came another turn - the 11th National Congress of the CPC in August 1977 declared the end of the Cultural Revolution and reiterated that the Party's fundamental task was to build the country into a socialist modern power. "The CPC has a strong mechanism of self-correction; internally it came from the democratic system of the Party, and essentially it is built on the Party's tenet of seeking interest for the people and rejuvenation for the nation," Zhao told the Global Times.

The perseverance with seeking truth comes across as building the economy's resilience that has dissolved various challenges and crises, such as the 1997-98 Asian financial crises, the 2008 global financial crisis and the COVID-19 pandemic, into hiccups which only result in increased economic sophistication, observers noted.

In response to the crises, the CPC was able to seek truth from facts and be flexible, as well as to be free from prejudice and ideological bias, encouraging local exploration and innovation, Zhao said.

In another striking and more recent example, the Party has managed to bid farewell to an unhealthy obsession with GDP growth that regards GDP statistics as the core or even the only indicator for assessing government performance, which stoked concerns over high GDP numbers at the expense of the environment and economic imbalance. For instance, in August 2014, East China's Fujian Province cancelled the GDP assessment in 34 counties and cities, and implemented the evaluation method of giving priority to agriculture and ecological protection.

Just as the CPC is very swift in correcting mistakes, it is also profoundly persistent and steadfast in carrying out scientific policies - another pillar of the CPC's economic success. The milestone Third Plenum of the 11th CPC Central Committee in December 1978 has been widely known as a starting point for the economy's 40-plus years of reform and opening-up, ushering in a transition from a class struggle-themed Party platform to a focus on economic building. 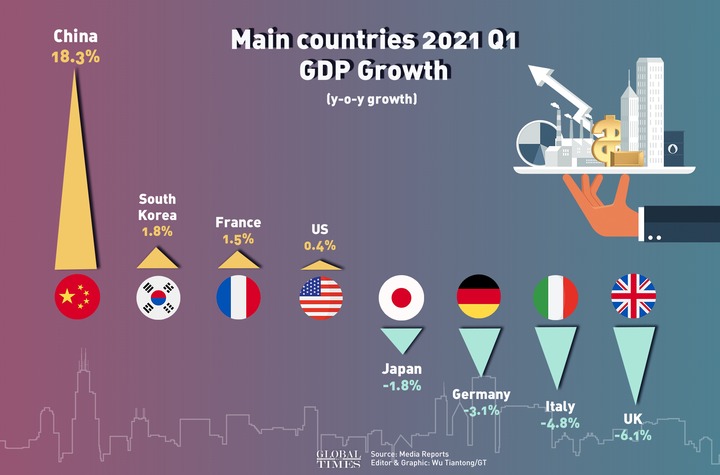 In 2020, China overtook the US to become the world's top destination for new foreign direct in-vestment. In the first five months of 2021 alone, China attracted 18,497 new foreign-funded firms and 481 billion yuan in foreign capital.

Content created and supplied by: Gandia (via Opera News )