By hassybaba (self media writer) | 1 month ago 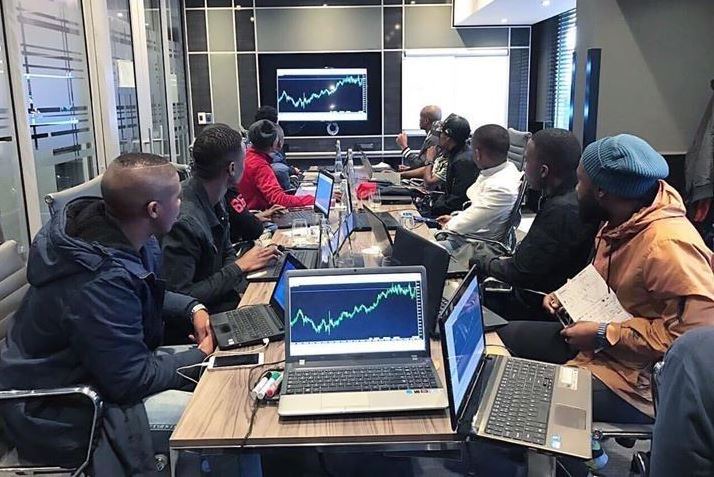 There are a number of wealthy Forex traders from South Africa, considering the recent growth in the market however, today we will be putting together a list of the most successful traders, and the most well-known without particular order. We will also dive into their individual bios.

Sandile Shezi, arguably one of the newest and best-performing traders from South Africa, is vastly acknowledged and respected due to the bet that he placed on himself. He also utilized his education to learn forex at a young age.

According to Sandile Shezi, living in the ghetto as a child was among the main reasons he was able to alter his lifestyle for himself. It was also a combination to the fact that he was a student at an elementary school in his hometown and owes it to himself to be successful and that was the reason that led him to spend his education in the Foreign exchange market.

After raking in solid profits, He re-invested in the market and made use of the profits to diversify his portfolio of wealth by investing in different assets.

Based on his experience with forex, he decided to establish a coaching center known as the Global forex institute. Here, students are taught by him, and helps them to change their financial situation.

Cashflow, as he's commonly referred to as, is a mature player in the game. He was among the first players to play. He has established his name within the game.

Even though he has stopped public and private talks due to controversy that sent him to prison for a short time and he's currently a speaker in the public eye and motivational speaker.

He also bet on himself after he quit his job and founded CashFlow Pro that has assisted a number of students to realize their dreams on the market for foreign exchange.

The renowned instructor to Sandile Shezi, George Van der Riet is a well-known forex trader with plenty of knowledge and experience He has a vast understanding of the markets for financial transactions and has worked with a variety of financial institutions in London.

After earning a few million in the early years of his life and was then involved in criminality and sent to prison in London and was ordered to have the entirety of his wealth frozen, but this did not stop the person.

Then he returned to South Africa after serving his term. He flipped $200 to one million dollars using the website TDMarkets.com and upon returning in the saddle, he began teaching Sandile Shezi and a host of other people.

I'm sure that you're not seeing this name before, Ref Wayne the founder of the first South African coin PIp - Coin is among the most underrated and well-known foreign exchange traders that you can find in South Africa.

One thing to appreciate about this person is that he isn't a fan of fake forex experts, and you'll find his name-calling them all out.

The author of 26 years, of The Art Of Trading, became a multi-millionaire at age of 22. He holds the record for the fastest automobile purchase within South Africa, He is a wild man with lots of faith that you'll be able to be awed by him.

On the other hand South African youngsters are struggling with the lack of jobs and trying to find a way of easing their burdens through Forex trading. However, at the same time, they don't have the necessary financial skills to actually make money from trading. This is the reason Ref Wayne wrote a number of guides on Forex trading strategies and strategies. He also distributed certain of them at no cost.

The duo of Paballo together with Danielle Lester is one of the biggest forces in the industry of forex within South Africa, and the fact that they are females can make you want to open your mouth and exclaim "Wow!.

An early morning interview with two women on the radio. They declared that the hurdle to women working in the field is low and they're helping other South African women believe in their abilities and that they are able to do the same And I'm sure the ladies have been doing this with the lectures and seminars the have been hosting.

Here's what the women's tell us " It was extremely difficult to get into a market where monopolies are thriving and new competitors are flushed out. We have something unique to offer which made us hard to eliminate.

We analyzed financial information and used technology and ingenuity to create models that do not just elevate the super-wealthy, but generate sustainable income for the middle class. We have created platforms for all ages, from CEOs to students to increase their incomes," Nkwe explains.

Louis always has been rich but we cannot remove him from our list due to the fact that despite being born rich He hustled for the majority of his wealth and was an early believer in forex. He jumped in, and it worked so well.

At first, he was a gym owner as a part of his plan to get South African youth from the streets and drug gangs and has assisted thousands of youngsters across Durban and across the nation. He has collaborated with companies such as Lamborgini, Benz, and numerous others.

He has been able to see the potentialities of forex and is now hosting workshops and classes for young people to assist them financially.

Simz D'Mandla was considered in his peer group as unlikely to be successful, coming from a small town called Tembisa located in South Africa, he hustled frequently in his career and held various jobs. at one point, he sold jeans and later cut the hair of people.

Today, he is the sole owner of Trade4Africa.org in addition to Fox trading, he's an expert in Wealth Coaching and Motivational Speaker. Angel Investor, Business Strategist, and philanthropist. He is one of the youngest South African self-made millionaires.

The first million he made at the age of 21 when most young men were out partying or racing after girls, the young people were already wealthier than 90% of his and his comrades. Growing up with one mother who was single and dropping out of school two times provided him with the necessary push to succeed.

A person's background and the place they grew up are not a determinant of one's abilities or how you'll be in the future. There is a lot to learn by making mistakes than doing anything in the first place. It is possible to use the mistakes as a way to reach our goals."

Nelisiwe Masango is a different lady who has proven that women also have the ability to succeed in the business world. The tough aspect for Nelisiwe Masango was when she was forced to change jobs from neurosurgeon to entrepreneurial management. She then decided to university and dropped out.

When most people are beginning to regret it, instead she began to learn about trading This was a bold choice that was the best choice ever made in the course of her career. Masango began trading and enjoyed immense success so that she became one of the most successful women South African Forex traders.

Nelisiwe Masango, who is currently in her 20s and has established three financial businesses She is the director of Bear run investments which is a Forex trading firm. "Female and Finances" with the aim of promoting financial security and raising awareness among women from South Africa.

Not to mention she runs "Gentle Hands Agency" - an agency for recruitment that seeks to aid those experiencing difficulties due to a shortage of employment.

Content created and supplied by: hassybaba (via Opera News )