We came here at around 6:30 in the morning, I thought we will be the first since we woke up early from Mabvuku (a ghetto) that is nearly 5 kilometers from the capital. But when Jairo, who didn't want to give his full surname because he was afraid of being victimized by the paranoid and repressive government arrives at Karigamombe to withdraw his bonus, there were more than 60 people ahead of him. 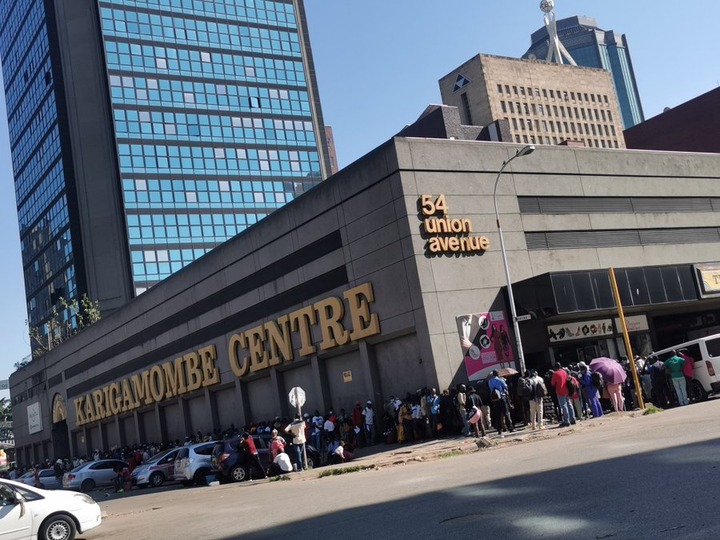 By 11 am when he was finally served, the ques has already spilled over to the other side of the street joined by nearly 100 people who were waiting to collect their USD $50 bonus which roughly translate into R806. This is what civil servants are working for, the whole year just for R806 as a bonus.

Although the bonus came as a relief to civil servants who are earning the local currency called bond notes which are now being abandoned by shops and the service industry. So once they get paid they rush to the 4th street where illegal money changes convert the bond notes into USD currency so that they can buy food.

For Jairo whose mother is now living with high blood pressure pills, changing the bond notes into USD is a must because many pharmacies don't accept the bond notes anymore. In the public hospitals which are now a death trap since they don't have any medication going there is almost useless.

To keep pace with hyperinflation, a lot of Zimbabweans had to engage in speculative activities. This relied on hoarding commodities that were in short supply in the 2000s. They would often resell these at inflated prices on the parallel market. This meant that prices of goods continued to spiral, with speculators making a quick buck. The surge in circulation and adoption of US dollars in Zimbabwe is attributable to growth in remittances from diaspora Zimbabweans as well as to hard currency revenue generation by informal gold traders. While the general economy has largely embraced the USD as the de facto currency, the government remains the biggest joke by paying civil servants in a currency that nobody accepts including government institutions like the passport office and revenue body called ZIMRA.

Limpopo came last on Matric results and become a meme

The unknown genocide of the black giants.

Grey slate scotch roof house you will fall in love with.