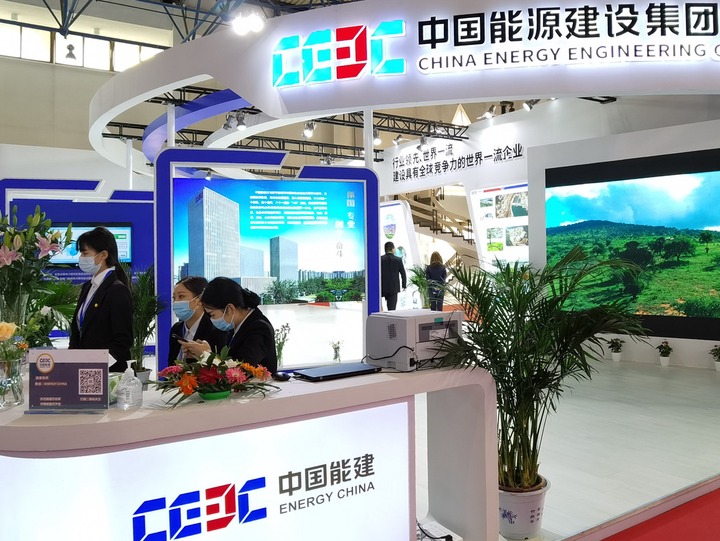 The booth of China Energy Engineering Group Co Ltd during an expo in Beijing. [Photo provided to China Daily]

The company saw its total value of signed contracts for projects overseas reaching 170 billion yuan ($26.33 billion) last year since it started laying out its global business some 40 years ago. The value of contracts under discussion exceeds 700 billion yuan, it said.

The contract amount of the more than 200 large and medium-sized projects under construction reached 500 billion yuan, it added.

China Energy undertook all the rights and obligations of the Gezhouba Group in early September and issued A shares to shareholders of Gezhouba Group to absorb and merge the company. It has then achieved A+H listings and can carry out capital operations in the H-share market and the A-share market at the same time, which will help the conglomerate to further expand financing channels, broaden its brand influence and enhance competitiveness.

The merger is so far the biggest restructuring trade in the global construction business.

"Establishing a strong overseas presence, especially in the wind, solar and hydropower sectors, is a key component of our business strategy to become a world-class clean energy group," said Song Hailiang, president of Energy China Group, adding the group sees tremendous potential in clean energy development for years to come, especially in countries and regions participating in the Belt and Road Initiative.

As the first case of the merger and acquisition by a listed company of a centrally-owned enterprise, their unification is believed to provide a model for the three-year action of State-owned enterprise reform.

Song said Energy China Group has built a sound reputation on the global stage in the past few years with its high-quality projects, including the NK/JC hydropower plant in Argentina, the Tengger Reservoir 60 MW floating PV project in Singapore, the Sao Lourenco water supply project in Brazil, and the Umm Al Quwain independent water project in the United Arab Emirates.

Founded in September 2011, Energy China Group is a large and internationally advanced energy engineering conglomerate with a well-known brand in the power industry in China and globally. It is supervised by the State-owned Assets Supervision and Administration Commission.

The experience makes them highly competitive, and they could become key players abroad in a few years as they are still in the process of learning how to successfully navigate different markets abroad, he said.

Jacobelli said he believes there will be more and more companies with renewable energy portfolios listing on Chinese stock exchanges, a trend that should be seen in overseas stock markets as well.