By TheWise1 (self media writer) | 3 months ago

Strive Masiyiwa one of the well-known philathropist, born a Zimbabwean, he is the men also that have contributed to the manufacturing of the vaccine for the billions of Africans to be vaccinated in numbers against Corona virus. This man has been growing in business while everybody was watching. This man has gone through prayers, has gone through preparations for him to establish the biggest business that he has now.

This is one of the black man that white business people they bow when they see him. He has actually put Africa on the world map. I don't know who is richer than the other one between him and Aliko Dangote. We know that Aliko is also one of the richest billionaires in Africa, including our own black billionaire Patrice Motsepe and so on, but for the fact that Strive Masiyiwa is a board member of the Rockefellers foundation and now he has been appointed to be a board member Bill Gates foundation.

It is shows what kind of a man he is becoming in business. There is no ordinary man that is in business that can just actually rub shoulders with men like Bill Gates, it shows that they are seeing him rising or more so to be one of them. These are the kind of the people that if they want to share their money, they can give everyone that is in the world more than 1 million dollars not talking of our weak African currencies.

So congratulations to Mr Masiyiwa and his wife, finally he is at where he wanted, his hard work, his prayers have worked and God will continue to elevate him just for African, or for balck people not to be looked down upon. Also just for Africa to be respected by the world, so we are happy that he is representing Africa, he is representing black people and he is also showing us that with determination, focus and discipline you can achieve any status in life, thank you. 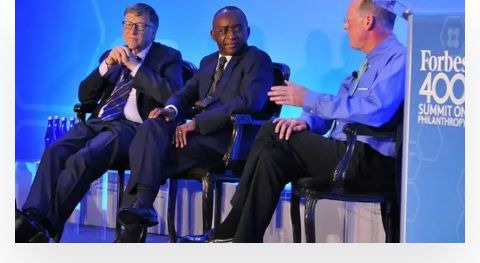 In May 2020 Masiyiwa was appointed to serve as an African Union Special Envoy to help co-ordinate Africa’s private sector efforts to procure medical supplies and fight the spread of Covid-19. As Special Envoy he also heads up the Africa Vaccine Acquisition Task Team. He led a similar private sector initiative to fight Ebola in West Africa in 2014-2015.

Together with Melinda Gates and Sri Mulyani, minister of finance of Indonesia, he served as co-chair of the Pathways for Prosperity Commission for Technology and Inclusive Development, headquartered at Oxford University.

Masiyiwa was a co-founder with Richard Branson of the Carbon War Room and the B-Team. He is also a founding member of the Global Business Coalition on Education.

Masiyiwa has served on two UN Commissions: Financing Global Education Opportunities and Sustainable Energy for All.

As a philanthropist, Masiyiwa is a member of the Giving Pledge. In 1996 he and his wife Tsitsi co-founded what is now known as the Higherlife Foundation which has supported the education of over 250,000 orphaned, vulnerable, and gifted children across Africa, as well as health, disaster relief and preparedness, and rural transformation programmes in conjunction with Delta Philanthropies.

Laugh till you shed into tears with these funny memes

Rihanna becomes a laughing stock after she revealed her new babys face.