AKA Calls Asks Elon Musk To Weigh In On The Load Shedding Problem In Mzansi, Stirring Up Tweeps

Regarding the load shedding issue in our nation, one of the most well-known South African celebrities sent a unique message to a millionaire who was born in Mzansi.

People from all walks of life, including those in rural and suburban areas, are being impacted by load shedding, which continues to have an impact on the nation's businesses as well.

The only way to resolve this issue, we are certain, would involve significant financial resources, which our nation reportedly lacks.

As a result, Mr. Kiernan Forbes, also known as "AKA," turned to Twitter to earnestly urge a billionaire by the name of "Elon Musk" to please acquire the entirety of Eskom and rectify the situation in his native country, which sparked a debate in the comments section.

Nevertheless, Elon Musk has not yet reacted.

I know you have a solution for load shedding … do it for your country 😭 … your original one. "

American entrepreneur and businessman Elon Musk, who was born in South Africa, created X.com in 1999 (which eventually evolved into PayPal), SpaceX in 2002, and Tesla Motors in 2003. When Musk sold his start-up company, Zip2, to a division of Compaq Computers in his late 20s, he became a multimillionaire.

According to reports, Musk will overtake Jeff Bezos as the richest person in the world in January 2021.

The following content is supplied from twitter.com and here is the link : 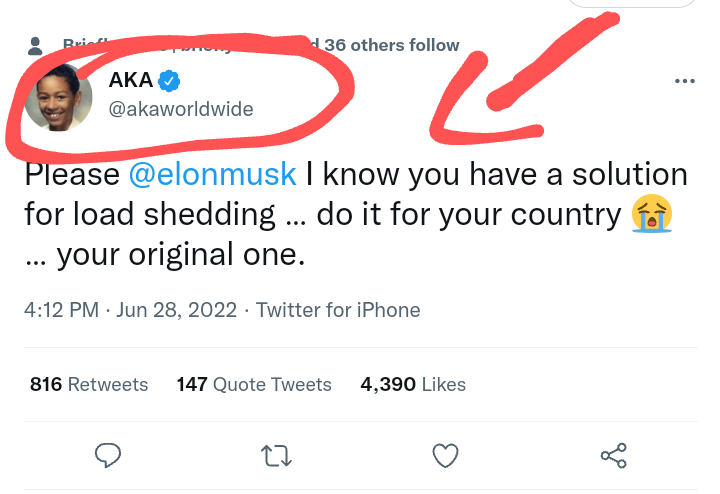 Ladies, Here Are Some Ways To Make Your Hair In Order To Look Good

15 Times People Have Gone Too Far With Their Car Modifications.