Good news from the president today

By spicynews (self media writer) | 15 days ago 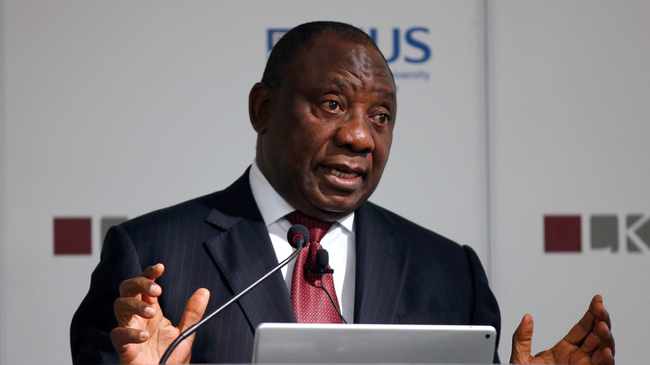 PRESIDENT Cyril Ramaphosa has given a solid sign that the public authority will before long make changes to smooth out the enactment administering framework advancement in a bid to support private area investment.

He said these alterations would incorporate new guidelines and changes to other enactment, including the current public-private association guidelines.

"We perceive the current arrangement and legitimate system for public foundation is divided, with many covering institutional jobs and helpless responsibility," Ramaphosa said.

"The administrative system expects to explain jobs and obligations among all significant organs of state in the readiness, endorsement, acquisition and conveyance of huge foundation ventures and projects, regardless of whether they are planned as open private associations or for direct monetary use."

Right now, there is a lot of duplication inside the state organs working with framework advancement, including inside the Department of Public Works and the Presidency.

Framework venture is fundamental to the monetary recuperation plan reported in October 2020 to help the economy for the time being, with public-area foundation spending over the medium-term use period assessed at R791.2bn.

Ramaphosa likewise said underspending on open foundation spending plans had passed on the proportion of gross fixed capital arrangement to (GDP) at a lessening 14 percent, rather than somewhere around 30% suggested by the National Development Plan.

"The attention is on capital interest in the huge organization areas of energy, water, transport and computerized," Ramaphosa said.

"Somewhere around 33% of the capital needed for this framework should come from the private area."

"We do project advancement, yet we do it considerably prior concerning doing the bankable achievability study (BFS) with the patrons, in this example it's for the most part the private area.

"The dangers are high, yet the venture is for the most part on the low-end. For instance, we are placing in R44 million for the BFS in the Sasol green hydrogen project.

"IDC essentially needs to collaborate with different private area players to get project advancement going, and this will then de hazard the undertaking available side."

Recently, Sasol reported a practicality study to investigate the capability of Boegoebaai, in the Northern Cape, as a product center for green hydrogen and smelling salts that could make up to 6 000 direct positions.

Because of persistent underspend

Pillay said the critical difficulties with foundation advancement was the absence of limit in the state, and store network the executives measures.

"We have thoughts dependent on present moment, medium-, and long haul intercessions so we gradually begin creating limit where it makes a difference," Pillay said.