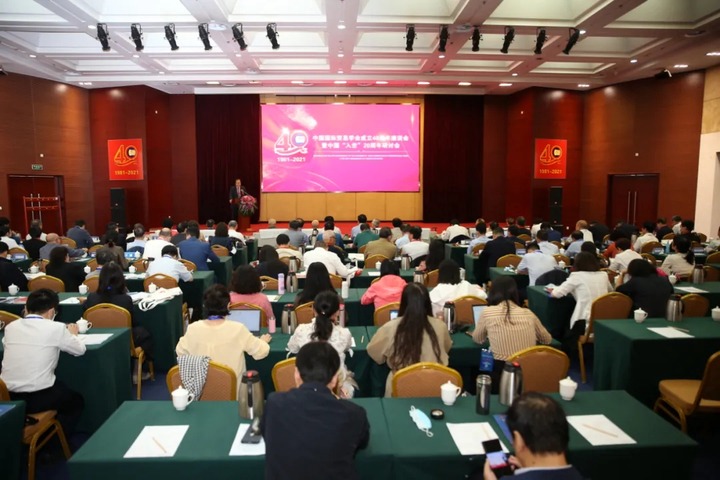 A seminar on the 40th anniversary of the founding of the China Association of International Trade and the 20th anniversary of China's accession to the WTO was held in Beijing on Sept 25, 2021. [Provided to chinadaily.com.cn]

Shi Guangsheng, former minister of foreign trade and economic cooperation and honorary president of CAIT, former deputy ministers Shen Jueren and Liu Xiangdong, Director Yang Zhengwei of the Commerce Ministry's Policy Research Office, as well as nearly 60 guests from the government, universities, scientific research institutions, associations of commerce and society and part-time vice-chairmen of the society were invited to attend the meeting.

More than 150 guests and member representatives from all over the country attended the meeting.

Jin said it is necessary to take 40 years of establishment as a new starting point, carry forward the past, inherit and innovate. Furthermore, he proposed to unite all members and build more platforms so as to create more opportunities for dialogue between academia and industry and continue to explore the integration and innovation of theory and practice to provide governments and enterprises with more accurate and valuable decision-making opinions and suggestions.

The conference also issued plaques and certificates to outstanding member units and individuals with outstanding contributions.

Shi summarized the role of the CAIT through the establishment of four platforms. The first is for theoretical and practical exchanges. The second platform is to exchange experience and innovation. The third is to build a bridge between foreign trade and other fields. And the fourth platform is for analysis and discussion of current and future situations.

Don't Ever Say These 3 Things To The Man You Love