The prostitute who repented was blessed with N6 million by the Billionaire Prophet. 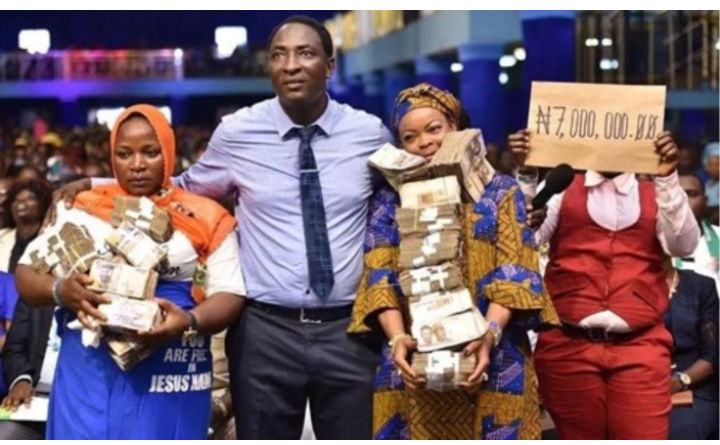 N6 million in blessings from Nigerian Billionaire Prophet Jeremiah Fufeyin to a prostitute who has repented and wants to start a new life.

Nigerian Billionaire Prophet Jeremiah Omoto Fufeyin has made a difference in the lives of former commercial prostitutes by donating millions of naira to them so that they can start anew in their careers.

As they were led to Jesus Christ by the senior prophet of Christ Mercyland Deliverance Ministry, billionaire Prophet Jeremiah Fufeyin, the prostitute publicly repented, revealing their journey, which included confrontations with kidnappers, they had no clue they would return home as millionaires.

Approximately six prostitutes sobbed hysterically during the church's Sunday service earlier today as the pastor gave them with N6 million.

A prostitute (whose identity has been suppressed) came out to testify about her amazing win over kidnappers who had disguised themselves as patrons in order to gain access to her clients.

Following a promise of N200,000 from a stranger, she claims she ended herself in the bush, but she was saved by a church band that she was wearing on her ankle at the time of the incident.

"It wasn't until I reached the bush that I comprehended what was going on. The man was armed with a long knife and attempted to cut through my throat several times, but the knife kept falling off. He began to refer to me as a witch and eventually fled. "I was able to find my way to the road before some kind souls came to my aid," she explained.

After being seduced by a promise of N200,000, she ended up in the jungle, where she was saved by a church band she was wearing on her ankle, according to the story she told.

For her part, Fufeyin had invited several other women who were addicted to smoking, drinking, and prostitution, and had delivered them while promising them six million naira each.

Even though the former prostitute and her family were celebrating, the prophet addressed the group by the title of God's children, emphasizing that ordinary people would not be able to comprehend the importance of what the church is doing without first gaining a spiritual knowledge.

As the prophet has already stated, this is not the first time he has done so. A group of 15 prostitutes who had a life-changing experience at the church shared their horrific experiences with the prophet, who then awarded them with N15 million. The event took place in August. Only a few days ago, ailing Nollywood star Emeka Ani was awarded a sum of N6 million to assist him with his medical costs.

During a church session, the church's founder, Fufeyin, exhorted persons involved in prostitute... (prostitution) to accept Jesus Christ and depart from their ways in a video that was uploaded on the internet and watched by this means. Following the 'alter call', some 15 women were led to Christ and received a Bible as part of their response.

Man Rapes A Mad Woman (See How He Was Caught)