Cryptocurrencies are a sort of decentralized, non-government controlled digital currency. Cryptocurrencies have a long history; in the 1980s, they were known as "cyber currencies." With the release of Bitcoin, which was developed by an unidentified programmer or group of programmers under the moniker Satoshi Nakamoto, these coins began to acquire prominence. 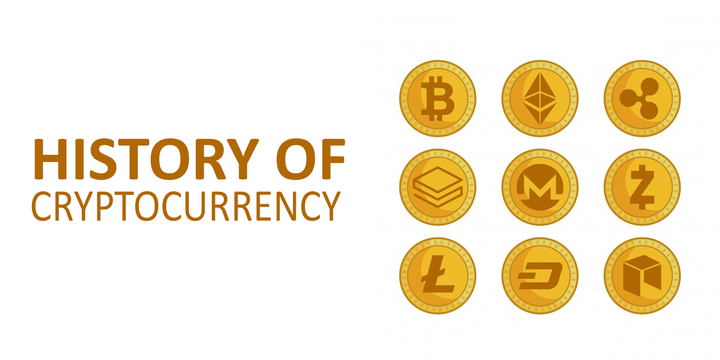 Cryptocurrencies have gained popularity since since the release of Bitcoin in 2009. Their appeal has increased as more and more people invest in them over the last several years. What are they, though? And from where did they originate?

In 1980, a few years after the first mention of cryptocurrencies, American cryptographer David Chaum created digital cash, which used cryptography to safeguard and verify transactions. However, the software and cryptographic methods that would enable the establishment of a genuinely decentralized digital currency didn't start to be developed until the early 1990s.

In a document published in October 2008 under the pseudonym Satoshi Nakamoto, a system for developing a digital money that did not require faith in any third party was described. Nakamoto's work served as the catalyst for the emergence of cryptocurrencies.

A cryptocurrency and global payment mechanism is bitcoin. The Bitcoin protocol was developed by Satoshi Nakamoto in 2009, the same year it became available as open-source software. People that need to transmit money across borders without interference from banks or governments are becoming more and more interested in Bitcoin. However, due to its quick increase in value, some people find it challenging to decide how to use their Bitcoins.

Hal Finney and Nakamoto exchanged Bitcoin for the first time on January 12, 2009. Not until a guy bought 10,000 Bitcoins for two pizzas delivered by Papa John's in February of the following year did anyone comprehend the potential value of this new technology. That deal would now be worth millions of dollars.