How to Harvest and Store Asparagus 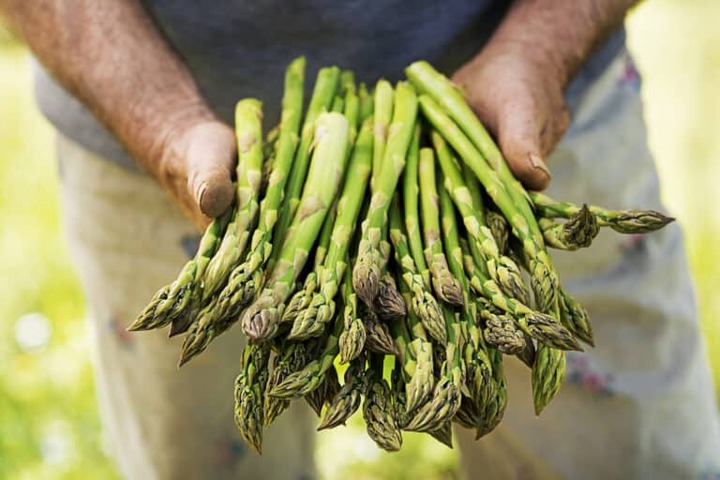 When to Harvest Asparagus

Asparagus is one of the first crops to come to harvest each spring. Early in the season when the weather is cool (less than 70°F/ 21°C), take spears that are 6 to 9 inches in length; as the season progresses and the weather warms take spears 5 to 7 long. A freeze can harm emerging spears so harvest ahead of freezing temperatures.

Harvest in the morning or evening when spears are crisp—this will help preserve freshness when stored.

Many asparagus growers follow the 1-2-4-8-week harvest sequence: pick for 1 week in the second year, 2 weeks the third year, 4 weeks the fourth year, and up to 8 weeks the fifth and following years.

Waiting a couple of years after planting to begin the full spear harvest allows the root system to develop and store reserves for spear production the following seasons. The bushy, ferny growth of asparagus plants during the summer is an indication of how well the plants are doing—waist to shoulder-high fern growth in summer indicates plants are strong.

Stop the harvest in any year when spears are less than a finger thick. (Spears greater than 3/8 inch (.9 cm) in diameter are graded as “large” while spears from ¼ to 3/8 inch are graded as “small.”) Overharvesting can weaken asparagus plants resulting in smaller yields in the following years. A rule of thumb is to harvest until the diameter of the spear decreases to the size of a pencil. Then it is time to stop and let the plants grow, gaining strength for the next season.

How to Harvest Asparagus

Harvest asparagus by snapping off the green spears at soil level. Snapping will break spears cleanly at a tender point.

Asparagus spears can be cut with a knife, but it is important to clean the knife between cuts. Cutting with a knife can spread diseases from plant to plant.

Be careful not to snap or cut spears too deeply; removing a spear too close to the crown can injure the crown which can affect next year’s harvest.

Harvest spears when they are as thick as your index finger or slightly larger; spears that are allowed to grow too big can become tough and difficult to snap or cut. Discard spears that have grown too big.

Spears that have begun to open at the tips will be too tough to eat.

Plant crowns at different depths, for example, 4 to 6 inches (10-15 cm), 6 to 8 inches and 8 to 10 inches. Spears from crowns planted a differing depths will emerge at different times; the shallow plantings will emerge first. This method will result in a longer harvest, but deeper set plants may be less productive than shallow set plants—shallow set plants will have a smaller spear diameter and deeper set plants will have a larger diameter.

A second way to extend the harvest for a few weeks is to remove mulch from half of the asparagus bed early in the season allowing the exposed soil to warm more quickly. This will cause sprouts to emerge earlier. When spears begin to emerge, remove mulch from the second half of the bed to allow the rest of the spears to emerge a few weeks later. Don’t pull back the mulch too early as frost can make spears inedible.

Similar to the second method is a third: When the harvest season is about half complete, mound up 5 to 6 inches (5-8 cm) of soil over unharvested rows of spears. The mounded soil will lower the temperature around the crowns and increase the size of spears still in the ground (the soil will also blanch or whiten the lower portion of the spears).

A fourth method to extend the harvest is to cut only half of the spears that emerge in the spring. Let the other half grow on to become ferny bushes, then in midsummer cut the bushy foliage down to soil level forcing the production of new spears. If you cut down a few bushes at a time there will be an extended, successive growth of new spears. Commonly, summer-forced plants produce one large flush of spears and then decline. Do not force spring-harvested plants in midsummer (for a second harvest in one year), you will weaken the crowns.

After ferns turn brown and die in the fall, mow them down in preparation for the next growing season. Avoid tilling asparagus beds since tilling will damage crowns.

A mature asparagus plant can produce ½ to ¾ pound of spears each season. Plant approximately 20 plants per household member.

How to Store Asparagus

Asparagus has a short shelf life. Immersing spears in cold water immediately after harvest and then refrigerating them will help maintain quality.

Wrap spears in a moist cloth or paper towel and place them in a perforated plastic bag in the vegetable crisper section of the refrigerator.

Asparagus is sensitive to chilling and after several days at 32°F (0°C) it will lose its sheen and the tips will turn gray. Storing asparagus at temperatures above 50°F (10°C) for a prolonged time will quickly cause the spear to become tough.

To store spears for several months, blanch them in boiling water for 3 to 5 minutes, douse in cold water, wrap, and freeze.