Former ESKOM CEO is building this in Zimbabwe. Read.

State-media in Zimbabwe has promoted the improvement as quite possibly of the greatest sustainable sunlight based project in the adjoining nation and in the southern Africa locale. 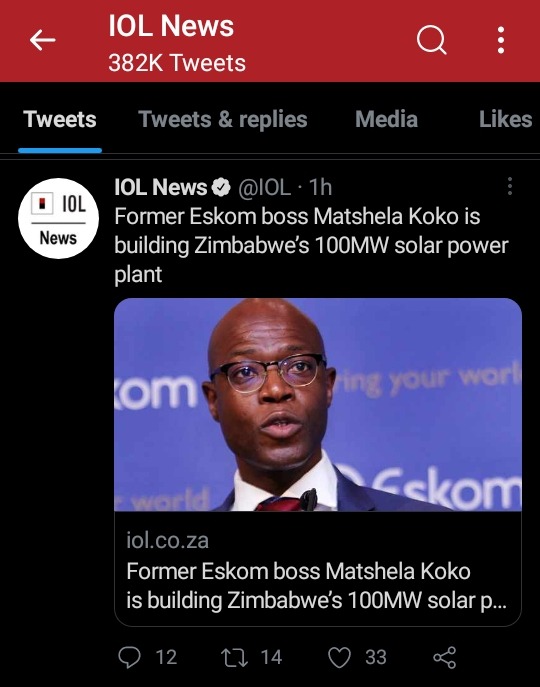 Previous Eskom break CEO Matshela Koko, the overseeing overseer of the autonomous power maker, said he was really glad with the finish of the arrangement as Zimbabwe integrated sun oriented energy to support lacking power supply and diminish carbon impression.

"Matshela Energy is satisfied to report that the power buy arrangement between the Zimbabwe Power Transmission and Conveyance Organization and Matshela Energy (PTY) Restricted for the 100 MW sun based PV power plant has been closed," said Koko. 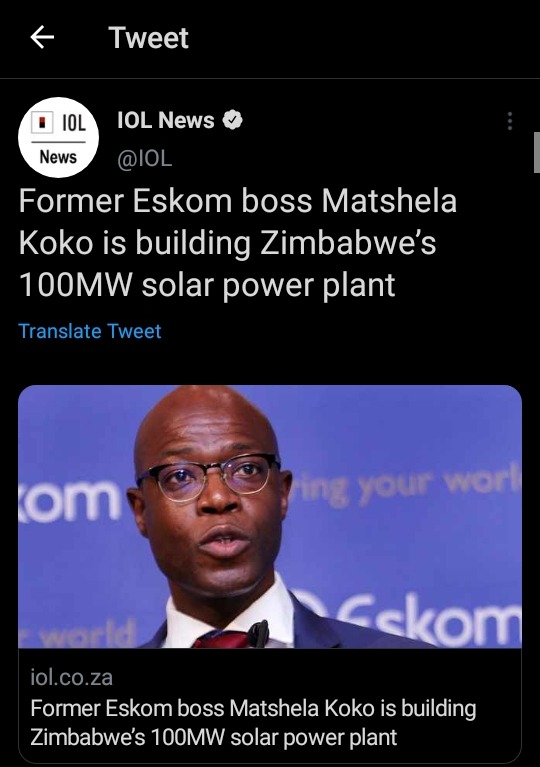 As far as the understanding, Matshela Energy is authorized as far as Segment 42 of the Power Act to develop, own, work, and keep up with the 100 megawatt sunlight based power station and connected battery storage space with a limit of 40 megawatt/hour at Gwanda Lumber Ranch in Zimbabwe's Matabeleland South territory. 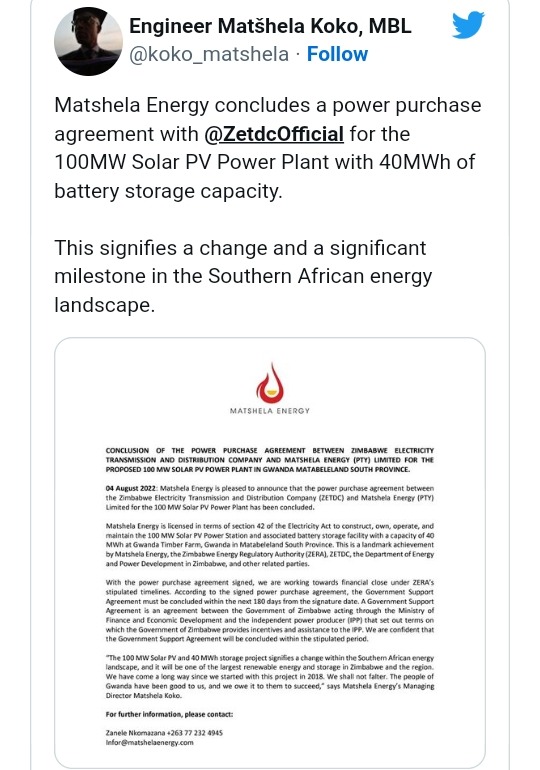 I won't return to Eskom, expresses Koko in the midst of Twitter supplications for his return

Koko said the arrangement was a "milestone accomplishment" by Matshela Energy, the Zimbabwe Energy Administrative Power (Zera), ZETDC, and Zimbabwe's Service of Energy and Power Improvement.

"With the power buy arrangement marked, we are making progress toward monetary close under ZERA's specified timetables. As per the consented to drive buy arrangement, the Public authority Backing Understanding should be closed inside the following 180 days from the marking date," Koko said. 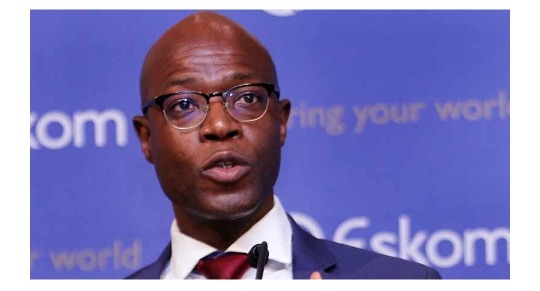 "The 100MW sun based PV (photovoltaic) and 40MWh capacity project means a change inside the southern African energy scene, and it will be one of the biggest environmentally friendly power and storage spaces in Zimbabwe and the district. We have made considerable progress since we began with this undertaking in 2018," said Koko.

"We will not flounder. Individuals of Gwanda have really taken care of us, and we owe it to them to succeed."

In South Africa, President Cyril Ramaphosa has affirmed talks for Eskom to import overflow power from Botswana had started as the energy emergency demolishes in Africa's monetary force to be reckoned with.

This comes after Ramaphosa declared last week Eskom would import power from adjoining nations through the Southern African Power Pool course of action as one of the actions to plug the 6000MW power lack on the network over the course of the following three months.

#MTN8 - Can Sibisi be entrusted to stop Shalulile?