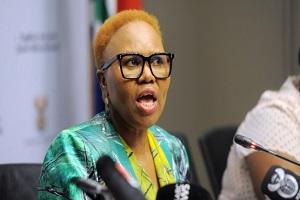 Social grants will reduce by 2.2% in the next three years according to Finance Minister Tito Mboweni who announced this in his budget speech. Social Development Minister Lindiwe Zulu says that her department understands the fiscal constraints which Treasury has had to deal with.

Recently beneficiaries of social grants provided by the South African Social Security Agency were met with a R30 increase in their payments as announced by the Finance Minister Tito Mboweni.

Many felt that these increases could have been higher.

National advocacy manager Hoodah Abrahams-Fayker said that increasing grants lower than the inflation rate is very little for people to be able to survive in the current context where people are facing the financial effects of the Covid-19 pandemic.

Human rights group Black Sash also said that it was incredibly disappointed in the low increase in the social grants. They say that the budget speech failed to consider the economy from a human rights perspective.

Social Development Minister Lindiwe Zulu says that this increase was a bit of a disappointment but she says her department understands that Treasury has been facing fiscal constraints.

"When you look at how much has been given in addition to what is already there it doesn't really help the poorest of the poor, but we appreciate and understand the current constraints that the government is facing."

While South Africa faces the economic effects of the Covid-19 pandemic, more and more people have been left without work and are now depending on social grants. Minister Zulu says that many of these beneficiaries do wish to do things to support themselves outside of receiving grants.

"When we look at the budget we wish we could have gotten more...but we have to be realistic about the situation and look at what else we can do in order for us to augment the support that we give to these communities," said Zulu.

In a briefing after the Budget speech, Minister Tito Mboweni said that there was "no need to be apologetic" about the small increases to the social grant.

"There's no social contract where every year there must be X amount increase. This is what we could afford," he said.

Mboweni also announced that the expenditure on social grants will reduce by 2.2% in the next three years, which totals to R36 billion. Minister Zulu says that her department would have preferred a full inflation increase but they understood that the fiscal constraints which Treasury had to deal with.

Treasury expects that the number of social grant beneficiaries will increase by 300 000 this year.

These 6 Foods And Drinks Will Keep Your Liver Healthy

The reason why SRD R350 grant have not been paid

What if Mmusi Reported Madikizela for False Qualifications ? - OPINION

5 Foods To Eat To Make Your Hips Grow Naturally