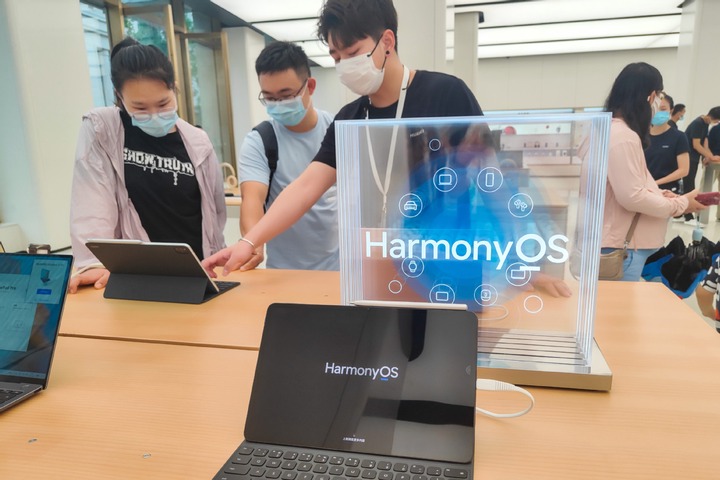 Customers try out Huawei products powered by HarmonyOS at a Huawei outlet in Shanghai in June. [Photo by Wang Gang/For China Daily]

Smartphones and personal computers are expected to see strong sales in the fourth quarter of this year, experts said.

The expectation came as smartphone and PC vendors have rushed to unveil their latest products and offer discounts for older models over the weeklong National Day holiday, when consumers tend to spend big to upgrade their electronics.

Xiang Ligang, director-general of the Information Consumption Alliance, a tech industry association, said the National Day holiday, which began on Friday, is typically a peak sales season for smartphones and PCs.

"This year is likely to continue the tradition, as a string of new smartphones were unveiled ahead of the holiday, featuring cutting-edge design such as under-display cameras and appealing prices," Xiang said.

Such a broad range of offerings covers all price segments for consumers, which can attract more people to upgrade their devices to 5G-capable ones, Xiang said.

Wang Xi, research manager of global market consultancy International Data Corp, said the price of the iPhone 13 with 128 gigabytes of storage, for instance, is about 800 yuan ($124) lower than that of the iPhone 12.

The change might prompt tech-savvy consumers who haven't yet switched their smartphones due to budget shortfalls to upgrade to the new iPhone, Wang said.

In August, 24.31 million smartphones were shipped in China, down 9.7 percent year-on-year, data from the China Academy of Information and Communications Technology shows. The decline was the result of weaker-than-expected demand and a lack of flagship products that could trigger consumer interest.

But the new flagship smartphone offerings are likely to help change the situation in the fourth quarter, experts said.

In addition, despite the overall decline, shipments of 5G phones are growing year-on-year. Shipments of 5G phones in China surged 79.7 percent year-on-year to 168 million units in the first eight months of this year. In August alone, 5G phones accounted for 72.8 percent of all smartphones shipped to China, according to data from the China Academy of Information and Communications Technology.

Such a laptop foray deepens a trend among smartphone brands - Xiaomi, Huawei and Honor Device Co have all launched notebook computers recently.

Fu Liang, an independent tech analyst who has been following the sector for more than a decade, said laptops, as productivity tools, continue to play a very important role in people's daily work, as shown during the COVID-19 pandemic.

With the entry of new players in the PC sector, consumers' enthusiasm to upgrade PCs is also likely to increase, Fu said.

The Custom Chevy Ramp Truck is more attractive than the majority of the vehicles it transports.