Unlike other names on the list, the Sony Ericsson Black Diamond doesn’t owe its price to diamonds and gold, but rather to its hi-tech capabilities and design (well, at least by 2006’s standards, when it was unveiled).

OLED technology illuminates the polycarbonate skin covering the entire surface of the device, giving its glossy screen a borderless look. Other features like the 4.0-megapixel camera might seem a bit quaint today, but all in all, the Black Diamond was a state-of-the-art piece of equipment back in the day, fully worth its $300,000 price tag. 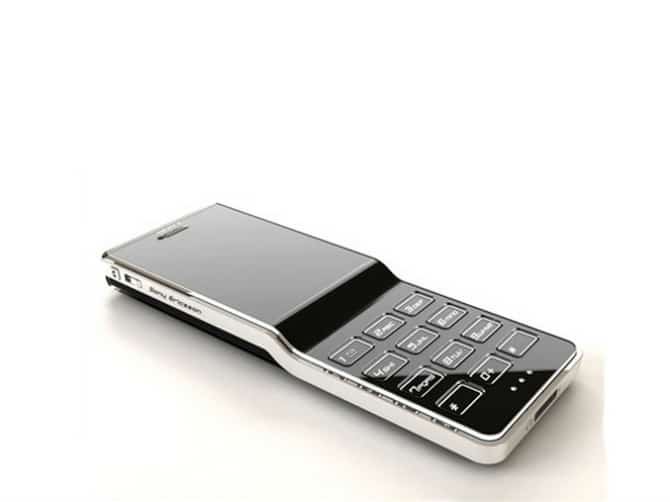 Vertu is known for making elegant and luxurious, if technically underwhelming, devices and the Vertu Signature Cobra, made in collaboration with French jeweler Boucheron, is their most expensive phone ever.

It features two diamonds, two emeralds and 439 rubies and has a distinctive design element in the form of a snake on it. It’s also as exclusive as they get, with only 8 pieces ever being made. Admittedly, its bold design is not for everyone – but neither is the price, which stands at $310,000. 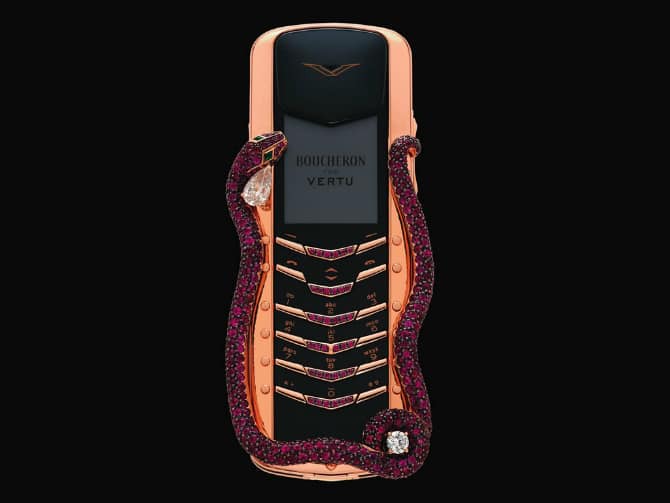 Gresso is a Russian company that makes exclusive and expensive mobile phones. Their crown jewel is the Egyptian-themed $1 million Luxor Las Vegas Jackpot.

Adorned with 45.5kt-worth of black diamonds, its back panel is made from 200-year-old African blackwood, which is the most expensive wood in the world. The keys are made from manually polished, laser etched sapphires, while the frame is 180 grams of solid gold. Only three of these phones were ever made, making the model as rare as it is pricey. 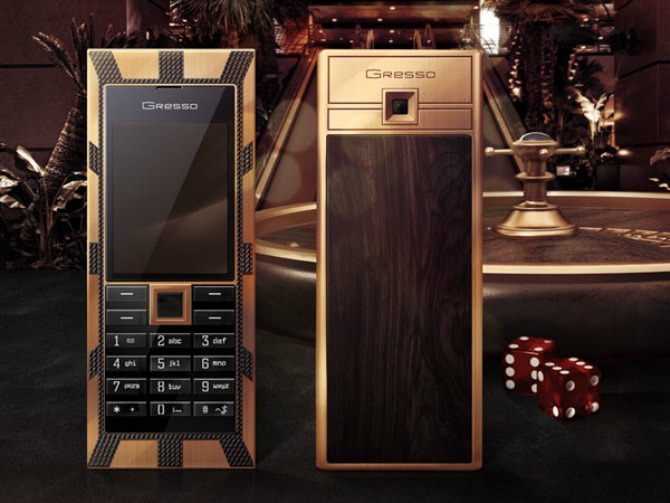 We’ve recently written about the Million Dollar iPhone – and its name says it all. Created by London-based luxury brand Alchemist, it is a luxurious device fully worthy of its price tag.

It features a handmade, 24kt gold bezel, as well as a 24kt gold plated navigation button with a single cut 2kt diamond. The lavishly decorated device also comes with a lifetime guarantee, so its person who paid $1 million for it can be certain the phone will forever look and feel just as stunning as it does now. 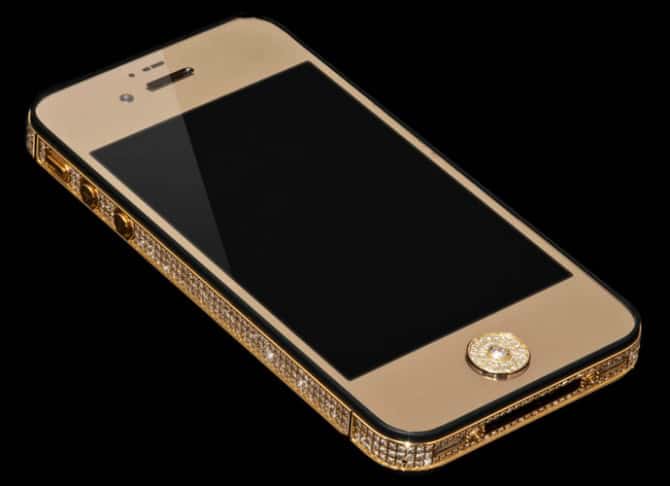 The demand for privacy is not something new. Even in 2006, secure communications was an issue – and this is where Moscow-based JSC Ancort came in, creating the Diamond Crypto Smartphone.

Of course, you don’t pay $1.3 million just for secure phone calls – the device owes its look to Austrian-born designer Peter Aloisson. It is adorned with no fewer than 50 diamonds, including 8 rare blue ones, while the Ancort logo and the navigation key are made of 18k rose gold. Ironically, such an expensive handset would probably have to be kept in safe – a minor inconvenience when the privacy of at least your most important communications is your goal. 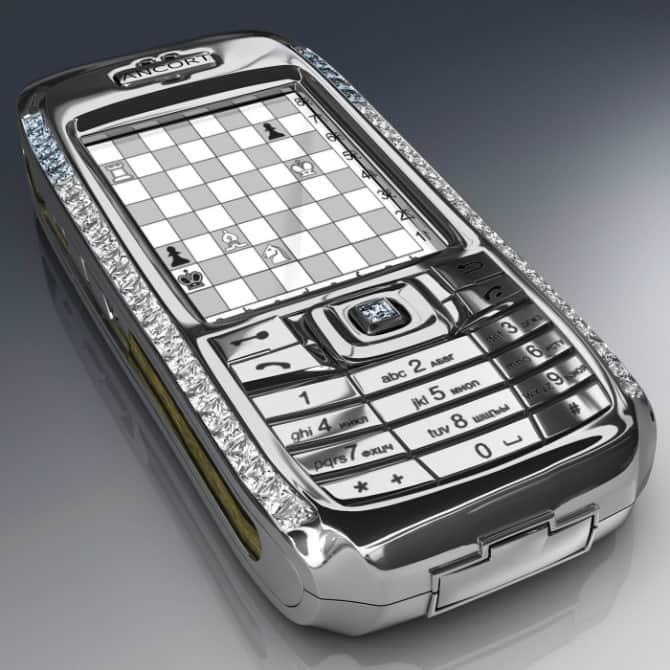 Geneva-based GoldVish is a company specializing in luxurious and unique phones, watches and accessories. So far, their crowning achievement is the $1.3 million ‘Le Million’ Piece Unique.

The 18kt white gold device was designed by Emmanuel Gueit as part of the Illusion Collection and additionally features 120 karats worth of VVS-1 diamonds. Only 100 of these splendid phones were ever made and while the model may seem outdated now (it was released in 2007, so it might as well have been the Stone Age considering how fast things move in the tech world), it still looks and feel like the exquisitely crafted piece it was years ago. 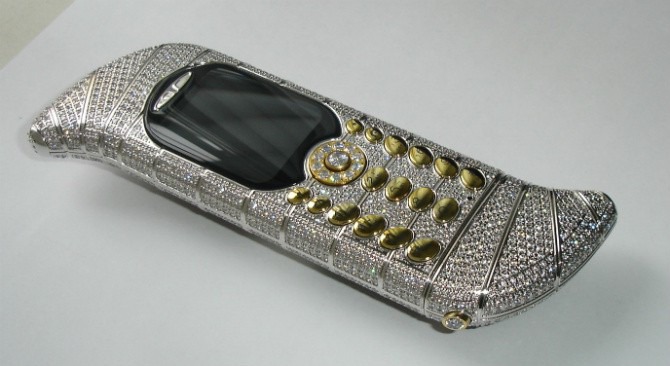 The King’s Button iPhone is truly a handset fit for a king. Designed by Peter Aloisson, it is made of solid 18kt yellow gold, with 138 brilliant-cut diamonds lining its sides.

The home button itself is another regal feature, with a rare 6.6kt white diamond at its center. Add up all this bling and you have yourself a $2.4 million iPhone. 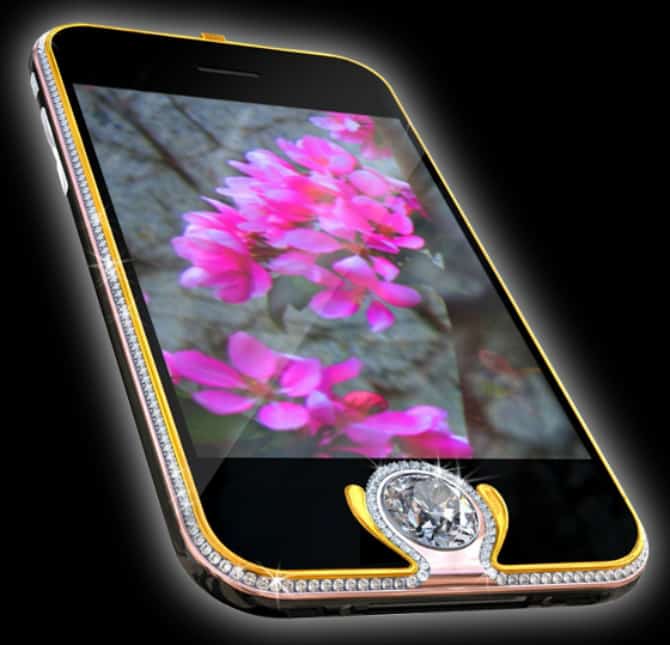 British-born designer Stuart Hughes is renowned for making the most stunning (and stunningly expensive) devices in the world and this iPhone 3GS Supreme perfectly epitomizes the quality of his work.

The phone’s casing is 271 grams of solid 22kt gold, while the front bezel features 136 flawless diamonds color F. The rear logo is also solid gold and boasts an additional 53 flawless diamonds, while the navigation houses a very rare single cut 7.1kt diamond. The exquisite handset comes with a hefty price tag of $3.2 million. 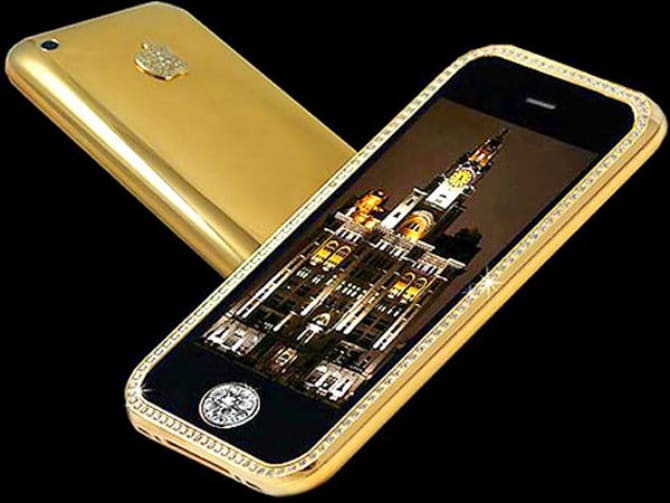 The iPhone 4 Diamond Rose Edition is another work of art by Stuart Hughes It’s covered in flawless diamonds, while the rear section is made using rose gold, with the Apple logo additionally covered in 53 diamonds. The home button is made of platinum and holds a single cut 7.4kt pink diamond, which can be replaced by a rare 8kt single cut flawless diamond – if pink isn’t your thing, we assume.

This amazing piece comes in a 14-pound chest made from a single block of Imperial Pink Granite lined with Nubuck leather. Well worth the $8 million. 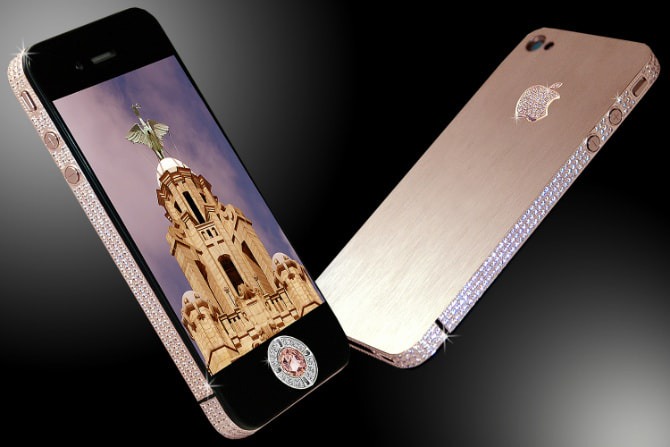 What would you do if you had a 14 and a half million dollar diamond lying around? You could sell it and buy a small island, or glue it to your iPhone and create the most expensive phone in the world.

Stuart Hughes (the name sounds familiar, doesn’t it?) had a client who owned a rare, deep-cut black diamond and decided to put it to good use, so he had the British designer adorn am iPhone 5 with it. And that’s not all – the glittering piece also has no fewer than 600 white, flawless diamonds on the Apple logo on the back and on the edges, bringing the phone’s value to a staggering $15 million. 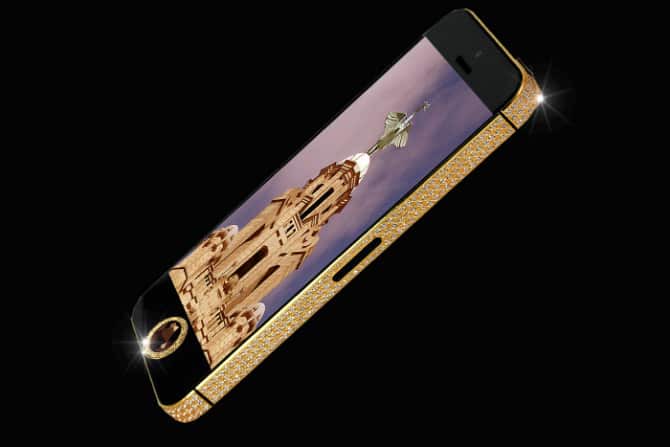