By #RhabuMkandla (self media writer) | 3 days ago

The eventuality of 1994 usher, what typically pops to one's mind is Mandela/De Klerk as they were main players in the game. In fact, the MAIN MAN was Dr Niel Barnard — the unsung hero, of course.

Dr Niel Barnard former head of National Intelligence Services NIS — started to talk about a need for a political settlement in 1982/3 to PW Botha whom he was still the Prime Minister. 1984 Botha assumed the title of State President, Barnard continued with his suggestion stance to Botha now then as the president.

Barnard broached a negotiated settlement to his boss PW and Botha had kept their talks a secret for nearly 6 years — without any one in the whole beaurucracy noticing. Eventually Botha accepted Barnard opinion. Botha "Dr Barnard, we want you to...meet Mr Mandela now there will be a team...Try to find out what you have been advocating for some time. Is it possible to find a peaceful settlement with the ANC, with this man Mandela. Try to find out what are his views on Communism..."

"Dr Barnard when should I inform even the Security Council, and when I should inform Cabinet about this secret negotiations that are taking place?" — Barnard warned Botha not to say a word yet, to no one! Because there was a lot at stake. 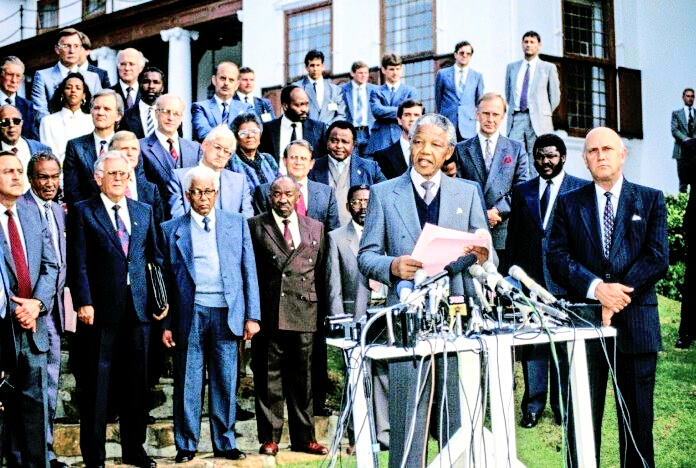 Source:www.dailymaverick-co-za.cdn.ampproject.org ( The unsung hero who changed the course of SA history )

Dr Barnard realized the role of his Department and did exactly what requires a person of his position. As an Intelligent Chief at the age of around 38 years — he studied the situation of SA realized the political violence unrest, State of Emergency. And economic sanction that was adding to the paralization of SA.

Barnard and his team met with Mandela for the first time in May 1988. Mandela was wearing overall and boots. Barnard recommended subsequent meetings Mandela must dress in a formal way, dressed up in a suit in line with his status. And meeting in a house of Pollsmoor prison commanding, Wellie Wellemse. At this stage Justice Minister Kobie Coetsee had joined in as well.

Barnard and Coetsee had moved Mandela from Polsmoor prison to a house in Victor Versvelt . In order to acquaint Mandela to new environment and living in normal house again. In fact, they suggested that Winnie would joined and live with Mandela in the house — but Winnie objected. On the grounds that other prisoners are not offered the same privileged.