27 September In History, Find Out Here

☞Today in History -- On today’s date 77 years ago, Wednesday, September 27, 1944, famous Canadian-American evangelist & media celebrity Aimee Elizabeth Semple McPherson (1890-1944), also known as Sister Aimee, founder of the International Church of the Foursquare Gospel, met her earthly demise at the age of 53 when she died from the effects of an accidental overdose of prescription drugs that was said to be probably compounded by kidney failure at the City of Oakland in Alameda County, California. 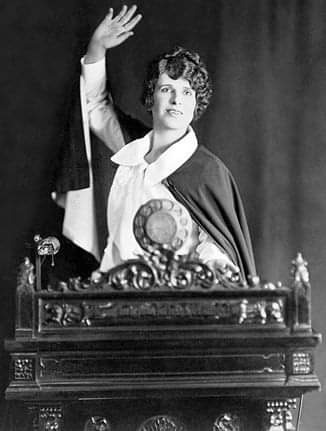 ☞According to Wikipedia: Aimee Semple McPherson, also known as Sister Aimee, was a Canadian-American Los Angeles-based evangelist & media celebrity in the 1920s & 1930s. She founded the Foursquare Church. McPherson has been noted as a pioneer in the use of modern media, especially radio, & was the second woman to be granted a broadcast license. She used radio to draw on the growing appeal of popular entertainment in North America & incorporated other forms into her weekly sermons at Angelus Temple.

In her time, she was the most publicized Christian evangelist, surpassing Billy Sunday & her other predecessors. She conducted public faith-healing demonstrations before large crowds, allegedly healing tens of thousands of people. McPherson’s articulation of the United States as a nation founded & sustained by divine inspiration continues to be echoed by many pastors in churches today. News coverage sensationalized misfortunes with family & church members; particularly inflaming accusations that she had faked her reported kidnapping, turning it into a national spectacle. McPherson’s preaching style, extensive charity work, & ecumenical contributions were a major influence in the revitalization of American Evangelical Christianity in the 20th Century.

☞According to Find A Grave: Aimee disappeared from Venice Beach while swimming. She was believed drowned & a funeral in absentia was held at the Temple. Five weeks later, she turned up at in the Arizona desert disheveled, dazed, & dehydrated claiming to having been kidnapped, then tortured. Investigation produced no suspects. It was rumored that the staged experience & embellishment of the account was merely a cover up for an affair with a former employee. The district attorney in Los Angeles was not impressed & charged her with obstruction of justice. Aimee stood trial, but the charges were eventually dropped due to lack of evidence.

Compiled by The Star100 via Opera News Hub