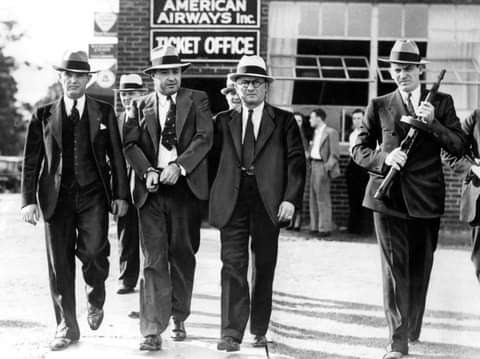 ☞According to one of the various legends that credit Kelly with coining the term “G-Men” for FBI agents, FBI director J. Edgar Hoover (1895-1972) supposedly claimed that when Machine Gun Kelly was arrested he shouted “Don’t shoot, G-Men,” & when questioned about what he meant by the term he replied “Government Men.” Another version of the story claims that upon the arrival of the lawmen, Kelly came to the door, dropped his pistol, & said: “I’ve been waiting for you all night,” after which Katherine Kelly put her arms around George & stated, “These G-Men will never leave us alone.” Some historians now believe that Kelly most likely never spoke at all during his arrest, & that the “G-Men” story was a fabrication by the news media a few months after he was arrested.

☞Kathryn Kelly had purchased George’s first Thompson submachine gun in February 1933 for $250 at the Wolf & Klar Pawn Shop in Fort Worth during the time that they were living in Kathryn’s house on East Mulkey Street where they plotted the kidnapping for ransom of Oklahoma oil tycoon Charles F. Urschel (1890-1970).

☞The Kellys were tried & convicted under the then-new “Lindbergh Law,” which made kidnapping a Federal offense if a kidnap victim was transported across a state line. Congress passed the law after the 1932 abduction & death of the toddler son of world-famous pioneer aviator Charles Lindbergh (1902-1974).

☞Machine Gun Kelly spent his last 21 years serving a life sentence in Federal prison. During his time at Alcatraz, he received the moniker “Pop Gun Kelly” in reference to the fact that he was a model prisoner & was nowhere near the tough, brutal gangster that his wife Kathryn had made him out to be. He spent 17 years on Alcatraz Island working in the prison industries, whilst boasting of & exaggerating his past escapades to the other inmates. In 1951, Kelly was quietly transferred back to Leavenworth Prison where on July 18, 1954 he died from the effects of a heart attack at the age of 58 on his own birthday. Kelly was buried at the historic 1885 Cottondale Cemetery in Wise County, Texas with a small headstone marked “George B. Kelley 1954.”

☞Not much is known about what became of Kathryn Kelly other than that in 1958 she was released from a Cincinnati women’s prison & that she afterwards took a job at an Oklahoma hospital as a bookkeeper. Kathryn was last known to be living in Oklahoma where she died at the age of 81 on May 28, 1985.

☞It is curiously interesting to note that approximately half of the $200,000 Urschel-Kidnapping ransom money has never been found.

☞The September 1933 photograph depicts a handcuffed Machine Gun Kelly surrounded G-Men at the Memphis Municipal Airport in Memphis, Tennessee. It is curious to note that Kelly & the law men bringing him in are all nattily-attired & wearing fedora hats, whilst one of them is toting a Thompson submachine gun -- the same weapon that is responsible for Machine Gun Kelly’s nickname.

Source : researched and compiled by The Star 100 via Opera News Hub