Lee Jun-fan November 27, 1940 – July 20, 1973), better known as Bruce Lee was a Hong Kong American martial artist, actor, director, martial arts instructor and philosopher.He was the founder of Jeet Kune Do, a hybrid martial arts philosophy drawing from different combat disciplines that is often credited with paving the way for modern mixed martial arts (MMA). Lee is considered by commentators, critics, media, and other martial artists to be the most influential martial artist of all time and a pop culture icon of the 20th century, who bridged the gap between East and West. He is credited with helping to change the way Asians were presented in American films. 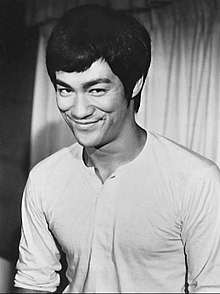 The son of Cantonese opera star Lee Hoi-chuen, Lee was born in the Chinatown area of San Francisco, on November 27, 1940, to parents from Hong Kong, and was raised with his family in Kowloon, Hong Kong.He was introduced to the film industry by his father and appeared in several films as a child actor. His early martial arts experience included Wing Chun (trained under Yip Man), tai chi, boxing (winning the Hong Kong schools boxing tournament), and street fighting (frequently participating in Hong Kong rooftop fights). Lee moved to the United States at the age of 18 to receive his higher education at the University of Washington in Seattle it was during this time that he began teaching martial arts, later drawing significant attention at the 1964 Long Beach International Karate Championships. In the 1970s, his Hong Kong and Hollywood-produced films elevated the traditional martial arts film to a new level of popularity and acclaim, sparking a surge of interest in the Chinese nation and Chinese martial arts in the West. The direction and tone of his films dramatically influenced and changed martial arts and martial arts films worldwide.

He is noted for his roles in five feature-length martial arts films in the early 1970s: Lo Wei's The Big Boss (1971) and Fist of Fury (1972); Golden Harvest's Way of the Dragon (1972), directed and written by Lee; and Golden Harvest and Warner Brothers' Enter the Dragon (1973) and The Game of Death (1978), both directed by Robert Clouse.Lee became an iconic figure known throughout the world, particularly among the Chinese, based upon his portrayal of Chinese nationalism in his films and among Asian Americans for defying stereotypes associated with the emasculated Asian male.Having initially learnt Wing Chun, tai chi, boxing, and street fighting, he combined them with other influences from various sources into the spirit of his personal martial arts philosophy, which he dubbed Jeet Kune Do (The Way of the Intercepting Fist). Lee had residences in Hong Kong and Seattle.

Lee died on July 20, 1973, at the age of 32. There was no visible external injury; however, according to autopsy reports, Lee's brain had swollen considerably. The autopsy found Equagesic in his system. When the doctors announced Lee's death, it was officially ruled a "death by misadventure". Since his death, Lee has continued to be a prominent influence on modern combat sports, including judo, karate, mixed martial arts, and boxing, as well as modern popular culture, including film, television, comics, animation and video games. Time named Lee one of the 100 most important people of the 20th century. 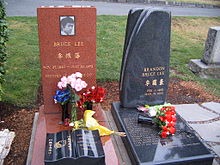 Bruce Lee is buried next to his son Brandon at Lake View Cemetery in Seattle.

On May 10, 1973, Lee collapsed during an automated dialogue replacement session for Enter the Dragon at Golden Harvest film studio in Hong Kong. Suffering from seizures and headaches, he was immediately rushed to Hong Kong Baptist Hospital, where doctors diagnosed cerebral edema. They were able to reduce the swelling through the administration of mannitol. The headache and cerebral edema that occurred in his first collapse were later repeated on the day of his death.

On July 20, 1973, Lee was in Hong Kong to have dinner with actor George Lazenby, with whom he intended to make a film. According to Lee's wife Linda, Lee met producer Raymond Chow at 2 p.m. at home to discuss the making of the film Game of Death. They worked until 4 p.m. and then drove together to the home of Lee's colleague Betty Ting Pei, a Taiwanese actress. The three went over the script at Ting's home, and then Chow left to attend a dinner meeting.

Later, Lee complained of a headache, and Ting gave him the painkiller Equagesic, which contained both aspirin and the tranquilizer meprobamate. Around 7:30 p.m., he went to lie down for a nap. When Lee did not come for dinner, Chow came to the apartment, but he was unable to wake Lee up. A doctor was summoned, and spent ten minutes attempting to revive Lee before sending him by ambulance to Queen Elizabeth Hospital. Lee was declared dead on arrival at the age of 32.

There was no visible external injury; however, according to autopsy reports, Lee's brain had swollen considerably, from 1,400 to 1,575 grams (a 13% increase). The autopsy found Equagesic in his system. On October 15, 2005, Chow stated in an interview that Lee died from an allergic reaction to the tranquilizer meprobamate, the main ingredient in Equagesic, which Chow described as an ingredient commonly used in painkillers. When the doctors announced Lee's death, it was officially ruled a "death by misadventure.

Lee's wife Linda returned to her hometown of Seattle, and had Lee's body buried in Lake View Cemetery in Seattle.Pallbearers at Lee's funeral on July 25, 1973 included Taky Kimura, Steve McQueen, James Coburn, Dan Inosanto, Peter Chin, and Lee's brother Robert.Around the time of Lee's death, numerous rumors appeared in the media.Lee's iconic status and untimely death fed many wild rumors and theories. These included murder involving the triads and a supposed curse on him and his family, rumors that persist to the present day.

Donald Teare, a forensic scientist, recommended by Scotland Yard, who had overseen over 1,000 autopsies, was assigned to the Lee case. His conclusion was "death by misadventure" caused by cerebral edema due to a reaction to compounds present in the combination medication Equagesic.Although there was initial speculation that cannabis found in Lee's stomach may have contributed to his death, Teare said it would "be both 'irresponsible and irrational' to say that [cannabis] might have triggered either the events of Bruce's collapse on May 10 or his death on July 20".Dr. R. R. Lycette, the clinical pathologist at Queen Elizabeth Hospital, reported at the coroner hearing that the death could not have been caused by cannabis.

At the 1975 San Diego Comic-Con convention, Lee's friend Chuck Norris attributed his death to a reaction to the combination of the muscle-relaxant medication he had been taking since 1968 for a ruptured disc in his back and an "antibiotic" he was given for his headache on the night of his death.

If You Are Not Using Castor Oil You Are Missing Out. Top points to know.

Home affairs got exposed after this was spotted. See more

Unvaccinated citizens should take note as Ramaphosa tends to do this from next week.

Wearing a Mask has made us weak, A new Super Cold is allegedly infecting people.