By Manamela (self media writer) | 3 days ago 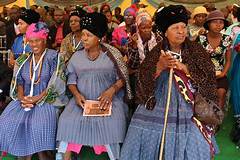 The Pedi people came from Western Sothos, better known as BaTswana and are descendants of the BaKgatla, a Tswana speaking clan who ended up living in 'Bopedi', present-day GaSekhukhune in Limpopo. GaSekhukhune is the land between Olifants Steelpoort River also known as the Lepelle and the Tubatse.

The Pedi people traces their roots from the Hurutse, who claim descend from

Malope, who was the son of Masilo. Malope had three sons, Mohurutse, Kwena and

Botlolo succeeded him. After the death of Botlolo, the tribe divided into two sections,

under Mogale and Tabane. Mogale, the elder son, remained near Rustenburg. Tabane left with his group and settled at what is known as Schilpadfontein. This group eventually gave rise to the Mmakau, the

During Thulare's reign, him and his people were frequently attacked by Matebeles of Mzilikazi.

Till this day, the Kingdom that was founded by Thulare is there in Limpopo in Ga Sekhukhune and these people are the real Pedi, whilst the rest of Sotho speaking people.

Natasha reveals how she got R1m funding from government.

Stop wasting money on insecticides; Use these 2 ingredients combined to kill Cockroaches faster

I was given 1 million by government to study acting: Mzansi is angry after Natasha reveal her this