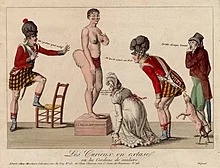 Baartman was born to a Khoikhoi family in the vicinity of the Camdeboo in what is now the Eastern Cape of South Africa.Her father was killed by Bushmen while driving cattle.Saartjie is the diminutive form of Sarah; in Cape Dutch the use of the diminutive form commonly indicated familiarity, endearment or contempt. Her birth name is unknown.

Baartman spent her childhood and teenage years on Afrikaner farms. She went through puberty rites, and kept the small tortoise shell necklace, probably given to her by her mother, until her death in France. In the 1790s, a free black (a designation for individuals of enslaved descent) trader named Peter Cesars met her and encouraged her to move to Cape Town. Records do not show whether she was made to leave, went willingly, or was sent by her family to Cesars. She lived in Cape Town for at least two years working in households as a washerwoman and a nursemaid, first for Peter Cesars, then in the house of a Dutch man in Cape Town. She finally moved to be a wet-nurse in the household of Peter Cesars’s brother, Hendrik Cesars, outside of Cape Town in present day Woodstock.Baartman lived alongside slaves in the Cesars’s household. As someone of Khoisan descent she could not be formally enslaved,There is evidence that she had two children, though both died as babies.She had a relationship with a poor Dutch soldier, Hendrik van Jong, who lived in Hout Bay near Cape Town, but the relationship ended when his regiment left the Cape.William Dunlop, a Scottish military surgeon in the Cape slave lodge, operating a side business in supplying showmen in Britain with animal specimens, suggested she travel to Europe to make money by exhibiting herself; Baartman refused. Dunlop persisted, and Baartman said she would not go unless Hendrik Cesars came too. He also refused, but he finally agreed in 1810 to go to Britain to make money by putting Baartman on stage. The party left for London in 1810. It is unknown whether Baartman went willingly or was forced.

Dunlop was the frontman and conspirator behind the plan to exhibit Baartman. According to a British legal report of 26 November 1810, an affidavit supplied to the Court of King's Bench from a "Mr. Bullock of Liverpool Museum" stated: "some months since a Mr. Alexander Dunlop, who, he believed, was a surgeon in the army, came to him to sell the skin of a Camelopard, which he had brought from the Cape of Good Hope.... Some time after, Mr. Dunlop again called on Mr. Bullock, and told him, that he had then on her way from the Cape, a female Hottentot, of very singular appearance; that she would make the fortune of any person who shewed her in London, and that he (Dunlop) was under an engagement to send her back in two years.Lord Caledon, governor of the Cape, gave permission for the trip, but later said regretted it after he fully learned the purpose of the trip.

Hendrik Cesars and Alexander Dunlop brought Baartman to London in 1810.The group lived together in Duke Street, St. James, the most expensive part of London. In the household were Sarah Baartman, Hendrik Cesars, Alexander Dunlop, and two African boys, probably brought illegally by Dunlop from the slave lodge in Cape Town.

Dunlop had to have Baartman exhibited and Cesars was the showman. Dunlop exhibited Baartman in the Egyptian Hall of Piccadilly Circus on 24 November 1810.Dunlop thought he could make money because of Londoners' lack of familiarity with Africans and because of Baartman's pejoratively perceived large buttocks. Crais and Scully say: "People came to see her because they saw her not as a person but as a pure example of this one part of the natural world".A handwritten note made on an exhibition flyer by someone who saw Baartman in London in January 1811 indicates curiosity about her origins and probably reproduced some of the language from the exhibition; thus the following origin story should be treated with skepticism: "Sartjee is 22 Years old is 4 feet 10 Inches high, and has (for a Hottentot) a good capacity. She lived in the occupation of a Cook at the Cape of Good Hope. Her Country is situated not less than 600 Miles from the Cape, the Inhabitants of which are rich in Cattle and sell them by barter for a mere trifle. A Bottle of Brandy, or small roll of Tobacco will purchase several Sheep – Their principal trade is in Cattle Skins or Tallow. – Beyond this Nation is an other, of small stature, very subtle & fierce; the Dutch could not bring them under subjection, and shot them whenever they found them. 9 Jany, 1811.The tradition of freak shows was well established in Europe at this time, and historians have argued that this is at first how Baartman was displayed. Baartman never allowed herself to be exhibited nude,and an account of her appearance in London in 1810 makes it clear that she was wearing a garment, albeit a tight-fitting one.

Her exhibition in London just a few years after the passing of the 1807 Slave Trade Act, which abolished the slave trade, created a scandal. Numerous Britons expressed discontent over a Dutch settler exhibiting an enslaved woman in the country.A British abolitionist society, the African Association, conducted a newspaper campaign for her release. The British abolitionist Zachary Macaulay led the protest, with Hendrik Cesars protesting in response that Baartman was entitled to earn her living, stating: "has she not as good a right to exhibit herself as an Irish Giant or a Dwarf?"Cesars was comparing Baartman to the contemporary Irish giants Charles Byrne and Patrick Cotter O'Brien.Macaulay and The African Association took the matter to court and on 24 November 1810 at the Court of King's Bench the Attorney-General began the attempt "to give her liberty to say whether she was exhibited by her own consent." In support he produced two affidavits in court. The first, from a William Bullock of Liverpool Museum, was intended to show that Baartman had been brought to Britain by individuals who referred to her as if she were property. The second, by the Secretary of the African Association, described the degrading conditions under which she was exhibited and also gave evidence of coercion.Baartman was then questioned before an attorney in Dutch, in which she was fluent, via interpreters. However, the conditions of the interview were stacked against her, in part again because the court focused on the Boer Cesars' involvement in bringing Baartman to London, while largely ignoring Dunlop's role in the affair; it prevented Cesars from being in the room when Baartman made her state, but allowed Dunlop to remain.

Historians have subsequently stated that this therefore casts great doubt on the veracity and independence of the statement that Baartman then made.She stated that she in fact was not under restraint, had not been sexually abused and had come to London on her own free will.She also did not wish to return to her family and understood perfectly that she was guaranteed half of the profits. The case was therefore dismissed.She was questioned for three hours. The statements directly contradict accounts of her exhibitions made by Zachary Macaulay of the African Institution and other eyewitnesses.A written contract was produced,[18] which is considered by some modern commentators to be a legal subterfuge.

A man called Henry Taylor took Sarah Baartman to France around September 1814. Taylor then sold her to an animal trainer, S. Réaux, who exhibited her under more pressured conditions for 15 months at the Palais Royal. In France she was in effect enslaved. In Paris, her exhibition became more clearly entangled with scientific racism. French scientists were curious about whether she had the elongated labia which earlier naturalists such as François Levaillant had purportedly observed in Khoisan at the Cape.French naturalists, among them Georges Cuvier, head keeper of the menagerie at the Muséum national d'Histoire naturelle, and founder of the discipline of comparative anatomy visited her. She was the subject of several scientific paintings at the Jardin du Roi, where she was examined in March as Saint-Hilaireand Frédéric Cuvier, a younger brother of Georges, reported: "she was obliging enough to undress and to allow herself to be painted in the nude." This was not really true: Although by his standards she appeared to be naked, she wore a small apron-like garment which concealed her genitalia throughout these sessions, in accordance with her own cultural norms of modesty.She steadfastly refused to remove this even when offered money by one of the attending scientists.Baartman's promoters did not need to concern themselves with slavery charges. Crais and Scully state: "By the time she got to Paris, her existence was really quite miserable and extraordinarily poor. Sara was literally treated like an animal. There is some evidence to suggest that at one point a collar was placed around her neck".