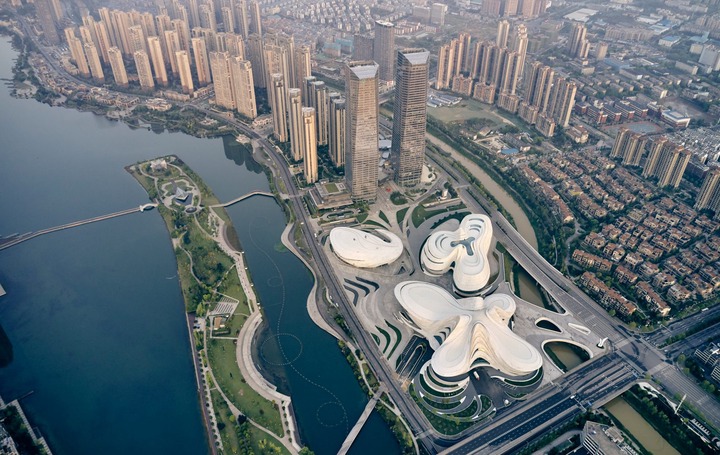 Due for completion this year, the 115,000-square-metre cultural complex is located beside Meixi Lake in Changsha, the capital of the Hunan province.

It contains a theatre, contemporary art museum and a smaller multi-purpose venue, which Zaha Hadid Architects has placed in three sinuous, petal-shaped buildings. 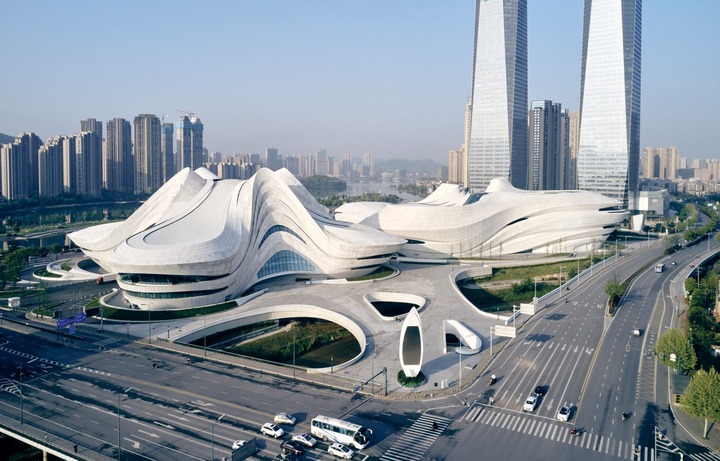 "Embodying values of functionality, elegance and innovation, the Changsha Meixi Lake International Culture & Arts Centre aims to become the new cultural and civic node for the city of Changsha, and well as global cultural destination," explained the studio when the project broke ground in 2013.

"Although these civic institutions are uniquely defined and separate, they supply each other in all respects within its setting with plazas offering visitors a tapestry-like sequence of urban ambiances that relate to the different institutions, inject the site with urban vitality." 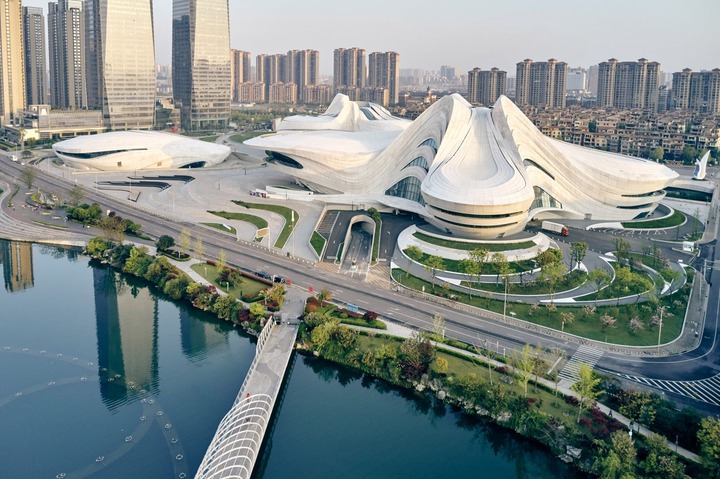 The photos reveal that the exterior of each building in the Changsha Meixihu International Culture and Art Centre has been completed, featuring the studio's signature white, fluid facades, punctured by curving panes of glass.

They sit atop a giant, stepped plaza, forming pathways between them that Zaha Hadid Architects has aligned with routes to the surrounding area. 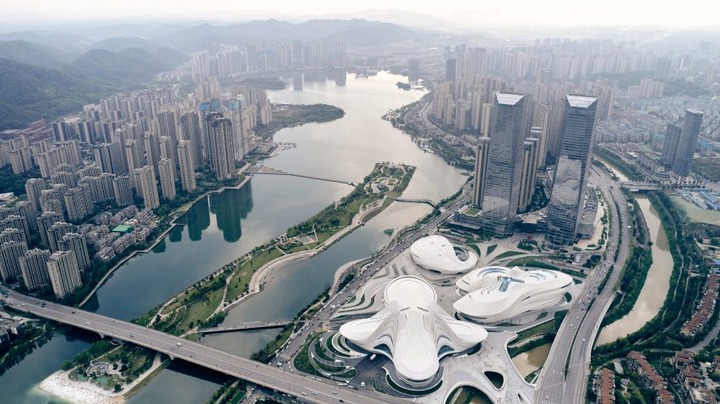 The complex's centrepiece is The Grand Theatre, which will be the "largest performance venue in the city" and hold performances for up to 1,800 people.

It will be complete with "all the necessary front of house functions", such as lobbies, cloakrooms, bars, restaurants, and VIP hospitality, as well as the rehearsal rooms and backstage facilities. 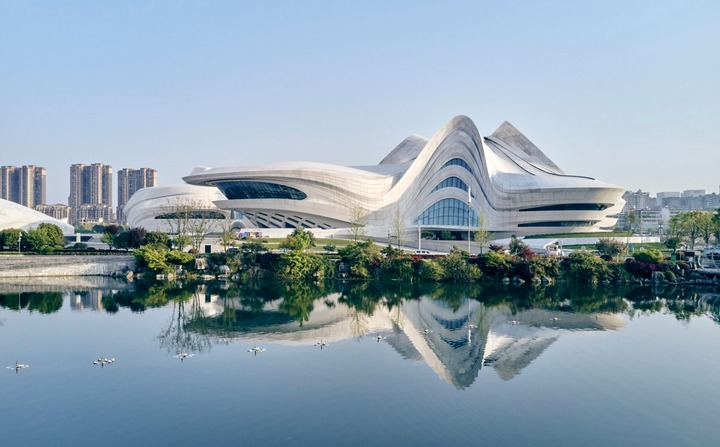 The Small Theatre is designed for flexibility. It can be adapted into a number of different configurations, with a maximum capacity of 500 seats.

It will also open out to a sunken courtyard lined with restaurants and shops. 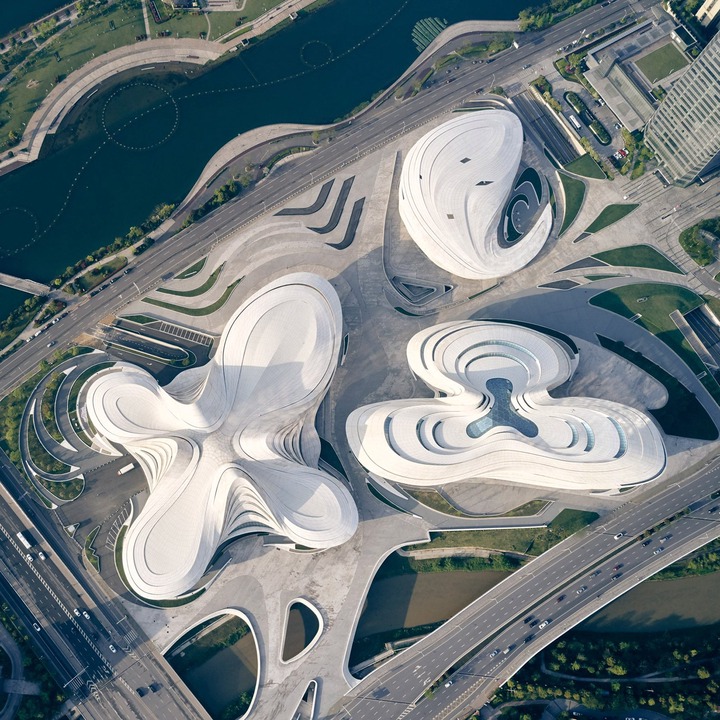 The final building, The Museum, is positioned on the edge of Meixihu Road and will have a central atrium that separates to form three wings.

Zaha Hadid Architects has designed it "to engage the site's unique location and surrounding views", and on one side it will lead out to a plaza that forms an outdoor sculpture exhibition area. 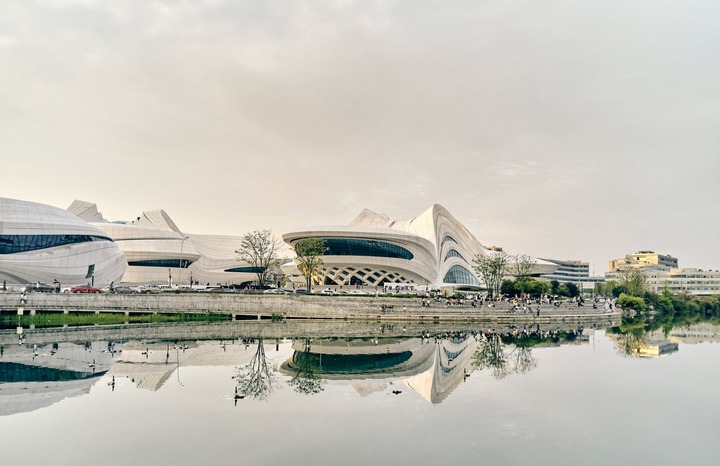 As part of its development, the studio has also built two pedestrian bridges that provide access to Festival Island, a linear islet located in the Meixi Lake.

Founded in 1979 by the late Pritzker prize-winning Zaha Hadid, Zaha Hadid Architects is an international architecture and design studio. Its main office is located in Clerkenwell, London.

Following Hadid's death in 2016, the studio is now led by Patrik Schumacher. In an exclusive interview earlier this year, Schumacher spoke to Dezeen about the impact her passing had on the studio, how it has grown, and its plans for the future.

Elsewhere in China, cities are experiencing rapid development, making it one of the most prolific countries for architecture in 2018.

Photography is by Gu Shi Yin.