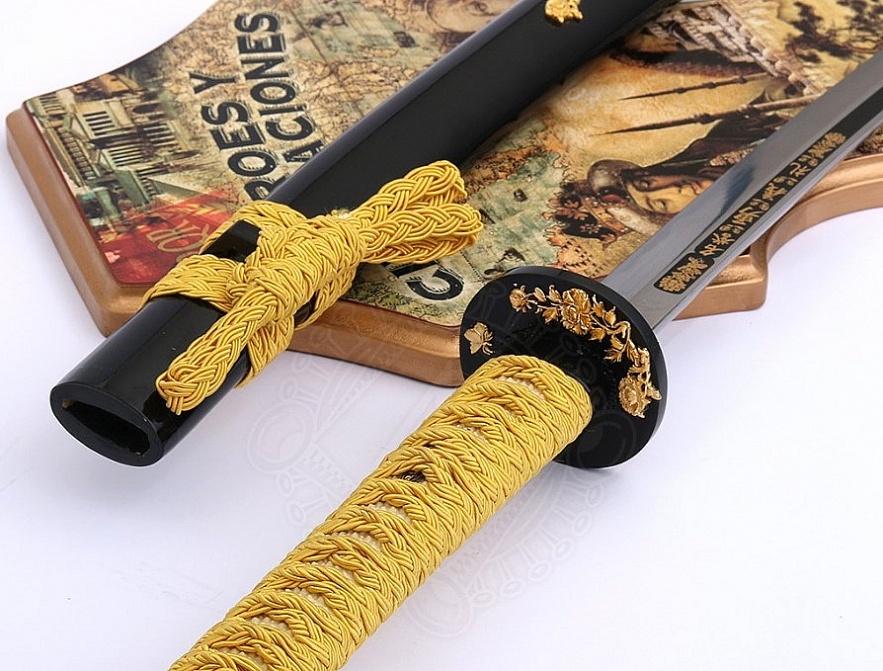 Samurai Swords Of All Time"/>

In Japanese ‘Tachi’ (太刀) means ‘Long Sword.’ It was the largest sword in Samurai’s arsenal, far bigger than Katana or Wakizashi. In fact, preceding the development of the Katana, it was Tachi that was the original traditional sword of the legendary Samurai warrior. Tachi, Katana, and Wakizashi differ not only in length and curvature, but also in how they are worn when sheathed.

This Tachi sword belonged to one of the most famous warriors and daimyos (feudal lords) in Japanese history – the great Fukushima Masanori (1561–1624). He is known as one of the Seven Spears of Shizugatake for his actions in the Battle of Shizugatake, where he had the honor of first blood. Throughout his life, he fought in many campaigns, including the Battle of Ch’ungju during the Japanese Invasion of Korea in 1592.

To this day, as worldart.news reported, Masanori is widely featured in Japanese media as a heroic Samurai warrior. It is hard to imagine that this Tachi sword was once held and possibly used in battle by Fukushima Masanori himself. Perhaps it was even the sword that drew first blood in the Battle of Shizugatake.

The Kamakura Katana sold in 1992. Swords of Northshire confirms that this is one of the few expensive and rare Samurai swords for sale. Most of them are kept in museums for the preservation of their historical and cultural values and they’re valued far higher than this example. The Kamakura period of Japan commenced in the year 1185 and continued through 1333. The sword is estimated to be from the Jumyo school in the Mino province of the Gifu prefecture. The name of the school means longevity.The Katana was a part of the massive sword collection of Dr. Walter Ames Compton. The blade dates back to the 13th century. It’s one of the oldest known Katanas that survived the ravages of time through the centuries.

It’s a trait conferred upon the quality of the swords they produced. There are only 125 known examples of Kamakura Katana swords to exist, and few are in such exceptional condition. Historians date this sword’s origins back to the Taima school of swordsmithing. Many of the swords made at the school were commissioned as thinner blades commissioned by monks and rarely were they ever signed by their wordsmiths. The Taima school swords came from Japan between 1288 and 1317. Few of the swords forged during the era have survived to the present.

This blade was signed by Naniwa Jyu Gassan Sadayoshi(浪花住月山貞吉) in November, the third year of the Bunkyu era(1863), based on the signature. Naniwa is where this swordsmith lived when he forged this blade. Naniwa is located in today’s Osaka prefecture, and Jyu means living in Japanese.

Gassan Sadayoshi’s real name is Gassan Yahachiro. He was born in Dewakoku(Yamagata prefecture today) in 1781. Gassan is the name of the school he belonged to. It was initially founded during the Heian period(late 12th century). It is said that the school name “Gassan” (月山) came from the fact that they forged swords near the mountain called Gassan in Dewakoku.

In Sadayoshi’s early career, he learned sword forging technique from his father, Okuyama Yasaburo Sadachika(山弥三郎貞近), who is said to have been a descendant of a member of O-Shu Gassan school (奥州月山), one of the oldest Gassan schools.

This blade is attributed to *Ko-Mihara, a prestigious school in Bingo province (Today’s Hiroshima prefecture).

According to recent studies, it is general knowledge that Mihara school was founded by Kokubunji Sukekuni (国分寺助国) in the late Kamakura period (Late13th century-Early 14th century). Two of the most prominent figures in this school are Mihara Masaie (三原正家) and his son, Masahiro (正広).

Mihara school is divided into three categories in Japanese sword terminology depending on the period. When the blade is older than the Nanbokucho era(the 1300s), it is called *Ko-Mihara (Old Mihara). And it is called Mihara for those forged in the early-Mid Muromachi period. Finally, Sue-Mihara(Late Mihara) is used for the late Muromachi period. Based on the NBTHK appraisal of this blade, it was approximately forged during the late Kamakura- Nanbokucho era (Early-Late 14th century). That means it is about 600 years old.

In Bingo province, many lands were owned by politically powerful temples of the Yamato region (today’s Nara prefecture) from ancient times. And many Samurai formed military groups to protect those lands, being hired by temples. And quite a few swordsmiths moved from the Yamato region to the Bingo region to forge blades for those Samurai.

As amuraimuseum.jp reported, it is said that the swordsmiths in Yamato region strongly influenced how swords were forged in the Bingo province because of the history above. The blades forged by Mihara school had distinctive characteristics of Yamato DEN, one of the five Japanese sword traditions (Gokaden).

This blade was forged by the second-gen Awataguchi Omi no kami Tadatsuna(粟田口近江守忠綱) in the early Edo period (Late 17th century), based on the characteristic of the signature on the tang.

The second-gen Tadatsuna is one of Osaka’s most skilled and popular swordsmiths in the early Edo period, following Tsuda Sukehiro and Inoue Shinkai. These three sword makers are called Sanketsu of *Osaka Shinto.