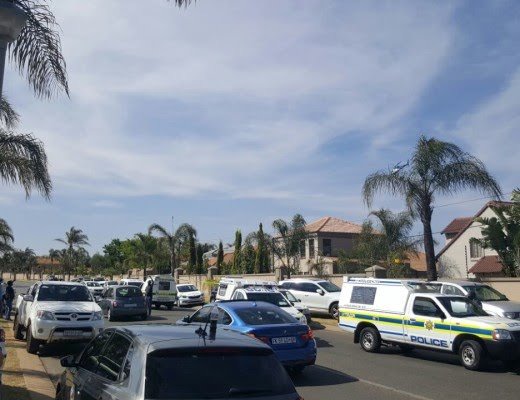 Metro police spokesperson, Wayne Minnaar, said, “Acting on a tip-off, metro police’s non-uniformed officers staked out at the targeted shop and saw eight armed suspects approaching the outlet who robbed the shop after forcing the staff members into the back room.

“When the JMPD officers intervened, the suspects fired shots at them and in the exchange, a JMPD officer was shot in the right leg. One suspect was also shot and later taken to hospital. The suspects hijacked a vehicle to make their getaway,” Minnaar said.

Metro police officers arrested them on the Pretoria Main Road, however, three of the suspects managed to escape and are still at large.

“Five suspects were arrested and police recovered illegal firearms together with ammunition and the stolen cash of R1 000. The five suspects are being detained at the Midrand Police Station and will face serious criminal charges of robbery and possession of illegal firearms,” he added

“It was because of the solid intelligence and combined effort that lead to this successful bust. There is no doubt that as the festive season approaches, the criminals would want to get busy, JMPD will work even more closely with the Saps, other law enforcement agencies, private security companies and the communities to ensure that there will be no room for criminals to stay in our City,” said MMC Sun.

If anyone has information on the above incidence or the whereabouts of the missing suspects, please call SAPS or JMPD on 011 375 5911 to assist with the investigations.

Content created and supplied by: Grootman1997 (via Opera News )