Two Chinese arrested in Nigeria for giving out bribe 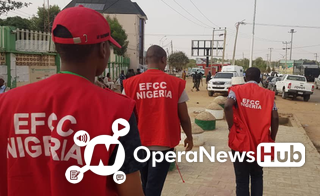 Two Chinese whose name are Meng Wei Kun and Xu Kuoi have been arrested by the Economic Financial Crimes Commission(EFCC). The suspects were said to have been paraded today, Tuesday after an operation which lasted for four days.

Abdullahi Lawal narrated that on the 7th of may, they he was contacted, alongside his team by Mr. Weng Wui Kun for them to receive the 100 million bribe, as he said after four days, it was agreed between me and him to come to his office and get half of the payment.

Lawal said the reason why EFCC were investigating the company was for alleged offences of conspiracies, abuse of office, diversion of public funds and money laundering, a case also which the company received 50 billion Naira from Sokoto government, and siphoned 16 billion amongst themselves.

The 'banana peel'; The Sad Exit Of EFCC Chiefs

CIT robbery in Vanderbijlpark: One crew member has been shot

From Ribadu to Waziri, Lamorde and Magu, This is How EFCC Bosses are Humiliated Out of Office