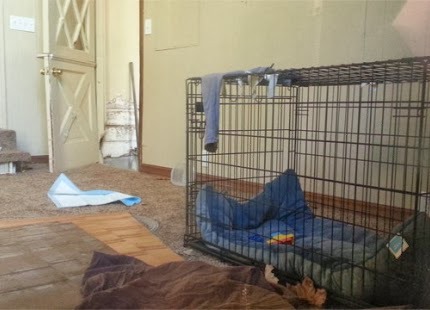 A teenage girl said to have been locked up in a wooden cage for 30 months by her parents over alleged strange ailment attributed to witchcraft has finally been released by members of a foundation.

The rescued victim, a twin, identified as Blessing Olokumo, an indigene of Ayibatari quarter, Opokuma, in Kolokuma-Opokuma Local Government Area of Bayelsa State, according to investigation conducted by the group, was diagnosed with a strange illness.

According to the acting President of the foundation, Comrade Tonyon Ebitei Robert, the strange illness led to the isolation of the girl by her parents due to her alleged constant incidence of defecation and soiling of the house.

Father of the girl, who is also a twin, allegedly built the cage and locked up the girl to keep her away from the main house.

“She was kept like a rabbit. She was given food when it is available and was allowed to sleep in her vomit, faeces and urine. She lost weight and could have died,” Robert alleged.

According to her, the group known for its campaign against maltreatment of twin child in the state, was contacted by concerned indigenes of Okolobiri community where the Olokumo family resides.

The first attempt by members of the group to reach the caged child was allegedly rebuffed by the father but their next trip was fruitful as he handed the child to them.

The rescued child was reportedly taken to the teaching hospital for proper medical treatment.

Though the father of the girl could not be reached for comment as he was said to have absconded from home, some indigenes of the community condemned the act, describing it as callous and wicked.

Premature Discharge: Here Are 5 Causes Of Early Discharge In Men And How To Cure It

Here is how to cook a yummy pig head stew.

Reasons why your pregnancy belly is smaller for your dates in weeks.

Dear Men, Stop Making Use of These 5 Dangerous Things, They Can Kill You before Your Time

‘I Blame AKA’: Oskido on DJ Zinhle’s Makeup, Alcohol & more

Children are being poisoned using this, read here

4 Nigerians Arrested For Eating And Selling Human Meat And Organs