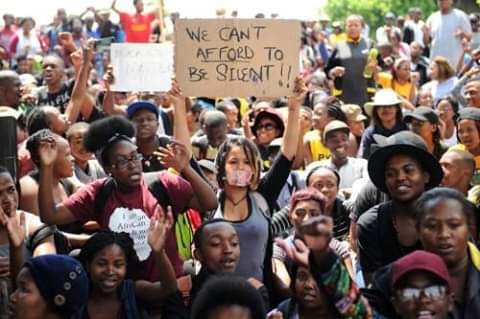 The gender-based violence scourge has reared its ugly head again in South Africa. A man has been arrested for the alleged rape and murder of a pregnant woman in Hlobane, northern KwaZulu-Natal.

Zilandile Xulu, who was seven months pregnant at the time, disappeared on 27 June and her body was discovered three days later.

Provincial Police Spokesperson Nqobile Gwala says initial investigations indicate that Xulu was killed in her bedroom before being thrown off a cliff.

“On the 30th of June, the body of Zilandile Xulu 34 years was found on the cliff after she disappeared from her home on the 27th of June and the deceased was found strangled to death and also raped and stabbed. A charge of murder was then opened for investigation at Hlobani police station and the police investigations revealed that the deceased was killed in her bedroom and dragged out of her home and thrown down the cliff. She was seven months pregnant when she was killed. Her body was discovered with the visible broken neck and several stab wounds to the stomach.”

-This is South Africa, soon he will be out on the street like any other RAPIST in the county. We can say what ever we want but the problem is the Rights of the rapist in SA. As if the poor women didn't have RIGHTS as well Everyday woman&child abuse related news COMPETE with covid news.

-And another woman become a statistic, thanks alot South African government. It seems as if you really want to become number one on everything bad, higher corona cases higher rapes. This is tiring to hear that a rapist was given a bail, only to be sentenced life imprisonment as they are scared of it. They really need to change this rules now.

-What's the solution to stop the killing of women and children? Government must do something here

-The sad part about SA is that shop lifters, Rapist and murderers share the same prison and catered for by the Government, no single day they sleep hungry stomach

Grandmother Caught In bed With Her 22 Year-Old Grandson