Old Man arrested for Molesting young girl he was babysitting

By RonewaRamulifho (self media writer) | 1 year ago 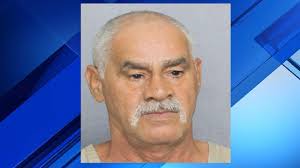 Women and baby girls are going through the most , they don't deserve such pain . People are fighting gender based violence but the cases are increasing instead of decreasing. It's so sad that women can't fight for themselves and the worse part is that the law is failing them . Uncle's and father's can't be trusted with baby girls no more because of what is happening around the world. A 67-year-old man turned himself in to authorities Friday after a warrant was issued for his arrest.

Bienvenido Pujols is accused of molesting a child he babysat on various occasions from October 2008 through October 2012 when the girl was between the ages of 5 and 9. He has been doing this to her for years .

According to his arrest report, Pujols forced the victim to kiss him, showed her an adult pornographic film and molested her. He was supposed to be her grandfather and protect her instead of harming her . Police said the victim would ask Pujols to stop and would cry, but he would tell her, “I don’t know why you’re crying. I know you like it.” You can only imagine what the baby was going through , with no one there to protect her. Kids don't forget that easily , this might affect her when she grows up and make her fear males .

He is charged for sexual battery of a minor and lewd and lascivious molestation.Detectives believe there may be other victims who have not come forward. As people we different, especially when it comes to expressing our selves , yes there might be victims who are afraid to come out because of being threatened and some because they are just not ready to.

Parents should be more careful when it comes to thier children, they should not trust anyone including family because many have been betrayed by their own blood .

With the look of things , it looks like molesting young girls its something he is used to , since he also managed to cover his tracks up . Police believe there are more victims out here who have been abused by the same man , if anyone with further information about the case or who believes they know someone who was victimized by Pujols is asked to call the Pembroke Pines Police Department at 954-431-2220. Say No to rape ! Say No to abuse. Protect your loved one's from these hurtless man .

SHAMELESS ACT: Suspects also got away with donated shoes for the school during a robbery

A Teacher Was Shot & Killed Outside A School At Phomolong, Tembisa, Gauteng