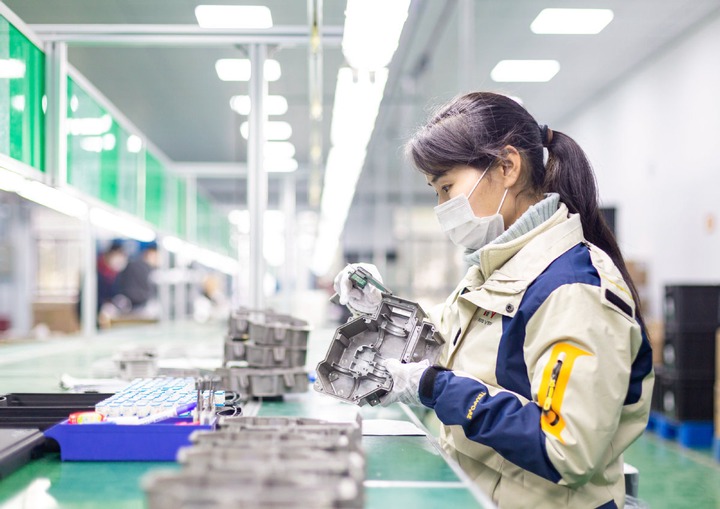 An employee works on the production line of a foreign-funded electronics company in Hai'an, Jiangsu province. [Photo by ZHAI HUIYONG/FOR CHINA DAILY]

China's younger generation born after 1995 is keen to work in high-tech industries at the cutting edge of innovation, but also attaches more importance to achieving a work-life balance than its older counterparts, according to a recent report.

Totaling around 260 million people and accounting for nearly 23 percent of the nation's total workforce in 2020, people born after 1995 have grown to be one of the main forces driving the nation's socioeconomic development, said a report released by online recruitment platform Zhaopin and the economic research team Zeping Hongguan.

According to the report, people in this age group prefer high-tech and newly emerging industries such as information technology and telecommunications.

About 21 percent of employees born after 1995 have secured jobs in the IT sector, 1.9 percentage points higher than the nation's average of 19.1 percent, said the report.

The real estate and manufacturing sectors are another two popular choices of the group, the report said, with those areas and IT attracting about 50.3 percent of jobseekers from the age group.

Brought up in an era of high-speed economic development and improved living conditions, people born after 1995 care more about the work-life balance rather than merely their salary.

The report said that the innovation climate and entertainment facilities, such as cinemas, are two major factors the younger generation consider when choosing where to work.

Beijing is their most popular employment destination thanks to its rich cultural resources and sound economy. Shenzhen, in Guangdong province, and Shanghai ranked second and third, especially among those with a higher education, according to the report.

The report said that about 12.2 percent of postgraduates in the group chose to find jobs in Beijing, while Shanghai attracted 9.6 percent and 5.1 percent opted for Shenzhen.

"It's my second year in Shenzhen," said Dong Liyang, a 26-year-old. "I got a job with a technology company when I graduated from Shanghai Tongji University in 2019."

"For young people, both Shanghai and Shenzhen are good places. I had stayed in Shanghai for four years, where the food and the lifestyle attracted me. But I wanted a change.

"Life in Shenzhen is also rich and colorful, with a more friendly working environment and supportive policies for college graduates. The city is young and energetic," he said.

Hangzhou, the capital of Zhejiang province, with its strong economic background and good situation in terms of innovation and entrepreneurship, was also a popular choice among young workers, said the report.

Shao Pingping, a 21-year-old from Zhejiang University, said she wants to start her own fashion design business after she graduates next year. "I also wish to settle down here for life," she said.

Shao, who is from Wuyuan, Jiangxi province, said her hometown is not very far from Hangzhou and she really loves the lifestyle and the working environment in the city.