Woolworths managed is exposed for being a racist.

By BlackPress_SA (self media writer) | 20 days ago

Many people speak out against the mistreatment of managers in certain organizations. A former Woolworths employee at Mall of the North has spoken out about the unfavorable treatment she received from her manager. should be changed to

After her resignation was overlooked and she was bullied by her boss, the County of Polokwane Her Lords Woolworths employee at her Mall of North took to her social media to vent her feelings. After being subjected to regular verbal and emotional assaults by her superiors at a Woolworths store in County Road Mall of the North, she eventually decided to leave her company. 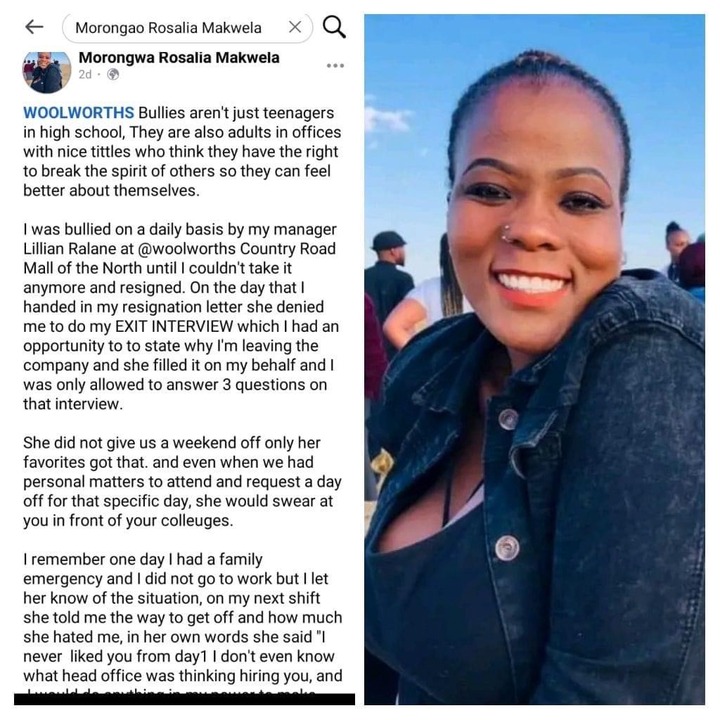 Although she announced her resignation to the organization, she was not actually fired that day. He claims he never gave him time off. Morongwa added that they want the exact day off and yell at him in front of her colleagues.

She explained that she had been unable to come to work because of a problem at her home the day before, even though she had told her employer about it. She replied that she remembered the episode. She said she hated herself and had to leave as soon as the next mission began.

Their real statement was used in the quote:

"To be honest, I didn't like you. I don't know what your manager expected when he hired you.