The ANC Has Finally Paid The Employee Salaries 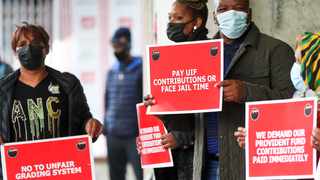 Johannesburg - ANC workers have at long last gotten a piece of their compensations.

This was affirmed by ANC Staff Representative Committee executive, Mvusi Mdala on Wednesday.

"We met with the administration last week and (following that), we have gotten installments for August and September," Mdala affirmed the installments to IOL.

He kept up with that the overseeing party had paid all representatives on December 6 for August, and December 7 for September.

He, notwithstanding, raised worries throughout the excess months that had not been covered which incorporate October and November.

"Sadly, we don't have the foggiest idea when they will pay us for the leftover months, yet we requested that they set up whatever they are doing as a written record," he said.

When requested remark recently, ANC public representative Pule Mabe said: "compensations issues are interior and talked about with the pertinent staff agents, not with the media."

Requested to say something regarding Mabe's perspectives, Mdala said: "I would rather not remark on Mabe's reaction, we will converse with him in a gathering in the event that there's a need. In any case, remember that it isn't just with regards to the compensation, it's additionally about the opportune asset and different requests that we have advanced of other staff individuals who are detesting any advantages."

The staff executive pronounced the non-installment of pay rates over the course of the months as causing a colossal gouge on how individuals have lost their resources.

"Indeed, even after this installment, some of it (the cash) went towards bank charges, covered bills that were exceptional for quite a long time and presently there is a hole for us to cover," he said.

He added that the non-installment of pay rates grieved staff individuals since some couldn't support themselves.

He said staff individuals would in any case hold a finish of-year meeting to examine a way forward on different requests they have put on the table.