Constitutional Court judge Mbuyiseli Madlanga, supreme court president Mandisa Maya, Gauteng high court judge president Dunston Mlambo, or current deputy chief justice Raymond Zondo will be SA's next chief justice. President Cyril Ramaphosa revealed that the four were named as the final contenders for the country's top judicial position. The names have been sent to the Judicial Service Commission and leaders of parties represented in the National Assembly, the president announced on Wednesday. 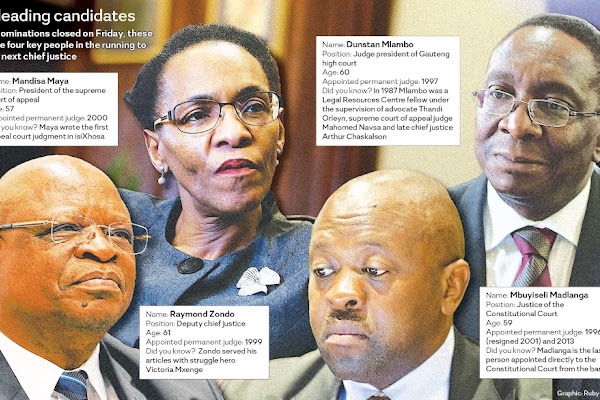 This follows Ramaphosa's invitation for public nominations for the job in September, after the departure of previous Chief Justice Mogoeng Mogoeng on October 11. The public nominations were examined by a panel, and those who met the announced criteria for nomination were shortlisted. According to Ramaphosa's office, he reached his final decision after reviewing the panel's report. The president chooses the chief justice and deputy chief justice, as well as the president and deputy president of the Supreme Court of Appeal, according to the constitution.