By Radioman (self media writer) | 1 year ago 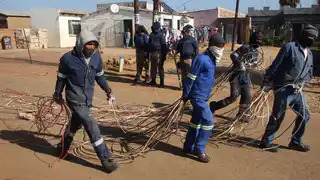 The City of Ekurhuleni has waged war against illegal electricity connections that have affected residents in the past few months,this power outages have led to residents in some parts of the City take to the streets through demonstrations to register thier frustrations on the lack of power supply in the Areas.

The City finally realised that, the on-going power outages affects businesses as well as those who are buying electricity and pay for services. Following an intense investigations by the City's Energy Department, it was discovered that most of the bulk of electrical power failures are as a result of illegal connections leading to overloading on the power grid.

A war against illegal power connections was launched and the first victims were residents of Makause Informal Settlement in Boksburg, were illegal cable connections were removed by City officials accompanied by Ekurhuleni Metropolice. More than 500 illegally connected electrical cables were removed leaving scores of residents in the darkness in that Area.

Themba Gadebe Spokesperson for the City says, illegal connections have serious implications not only on service delivery but pose a serious danger to communities as well. He says more people have been electrocuted in the process and it is important as a Metro to educate residents about the dangers of illegal power connections.

This will be an ongoing campaign of removing illegally connected electrical cables and residents are urged to pay for services. Thus will assist the City to deliver efficient services to the entire Ekurhuleni.

Gadebe further calls those with queries to visit their nearest Customer Care Centre's, were they should lodge their complains and the officials will be in a position to assist.

Content created and supplied by: Radioman (via Opera News )