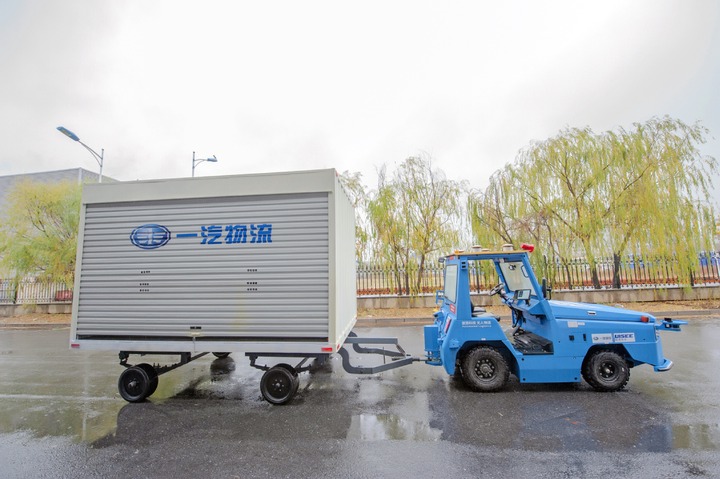 An unmanned logistics vehicle of UISEE. [Photo provided to chinadaily.com.cn]

Driverless trucks will help revamp the logistics and industrial sector in China, as autonomous driving technologies have taken off in the country amid the COVID-19 pandemic.

Plus, a leading company in self-driving truck technology, launched China's first commercial freight pilot project recently in cooperation with SF Express. As part of the ongoing pilot, Plus is running its supervised autonomous trucks on two long-haul routes－from China's Wuhan to Wuxi, which is about 1,448 kilometers for round-trip－and Changshu to Wuhan, which is 1,609 kilometers for round-trip.

"The logistics industry around the world is undergoing a sea change driven by the explosive growth of e-commerce and demand for faster deliveries. The unmanned technology is to address the critical business issues fleets are facing today－keeping their drivers happy and productive, reducing operating costs, and meeting sustainability goals," said Shawn Kerrigan, COO and co-founder of Plus.

Kerrigan noted that the company developed PlusDrive, which is designed to keep a professional truck operator in the vehicle to supervise the autonomous driving system, and that allows SF Express to optimize the efficiency of its current fleet and not to wait for years for full driverless trucks to be ready.

Uisee, another leading autonomous driving firm, told China Daily it has achieved a year-on-year sales growth of 150 percent last year despite the COVID-19 pandemic. By cooperating with industry leaders such as Changan Minsheng Logistics, FAW Logistics, BASF and Dongfeng Motor, the company has been developing Level 4 autonomous driving logistics.

At the beginning of this year, the company has raised over 1 billion yuan ($150 million) in its latest round of fundraising. It was also the first time that the National Manufacturing Transformation and Upgrade Fund, a 50.1-billion-yuan State-owned fund to promote the country's manufacturing industry, has invested in a self-driving company.

He Xiaofei, founder and CEO of Fabu, who was also former deputy president and a top self-driving expert of Chinese ride-hailing giant Didi Chuxing, left Didi and founded the company in 2017 and has raised an undisclosed sum from Sinovation Ventures, a Beijing-based leading early-stage venture capital firm.

"Compared with driverless passenger vehicles, commercial vehicles including unmanned trucks follow a fixed route, for example from one warehouse to another, and run in a relatively simple way," He said, adding it's also one of the reasons why autonomous trucks are likely to be commercialized faster than passenger vehicles.

As 5G is quickly expanding its application across the nation, the superfast technology will inject new impetus to the commercialization of driverless trucking in the country.

"The fuel consumption of a traditional mining truck is big, but the unmanned vehicles can greatly reduce that consumption through the control of speed, throttle and braking for the best fuel efficiency," Zheng said.

"Without 5G, transportation can only be regarded as automatic but not intelligent. Only with the high bandwidth and low latency of 5G can we collect massive amounts of data in real time and continue to do intelligent learning to finally save energy."

Alex Zhang, partner and head of the industrial group at investment firm FountainVest, said:"Self-driving technology will be transformational for the trucking industry by making our world safer and greener, and helping fleets drive with more fuel efficiency and reduce operating costs."