No arrests yet after vehicle set alight in Bendor 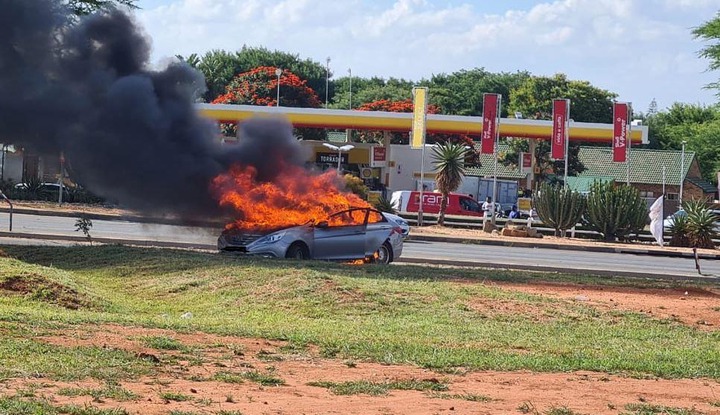 A sedan, reportedly used by the Moletjie Taxi Association to patrol the taxi rank, was set alight in a taxi violence incident earlier today.

POLOKWANE – Polokwane Station Commander, Brig Gift Makhubele, confirmed that no arrests have been made thus far after a vehicle had been set alight in Bendor earlier today.

Members of the Moletjie and Seshego taxi associations were involved and investigations are still at an early stage,” he said.

Johan Retters, Bendor and Sterpark Safety Forum Chairperson, said they were also on the scene.

“We did not gather a lot of information from the taxi drivers and no one is sure what happened,” he added. Review received imagery of the Seshego Circle Centre, where dozens of taxis can be seen parked at the centre. We contacted the Seshego Taxi Association Spokesperson, Mushita Lekganyane, regarding information doing the rounds that no taxis were available since late afternoon.

Presently no taxis are available from the Seshego and Polokwane Taxi Association to the extensions and from the Mall of the North. This is due to the infighting by members of the Moletjie, Mankweng and Seshego associations because of the loading of commuters at the mall he said.

Lekganyane could not confirm whether or not taxis from their association will be available tomorrow.

POLOKWANE – A sedan, reportedly used by the Moletjie Taxi Association to patrol the taxi rank, has been set alight in a taxi violence incident.

Police are currently on the scene on the corner of De Wet and Munnik Avenue, and motorists are advised to use alternative routes in the meantime.

Do not eat these things even by mistake before sleeping at night, otherwise it will be gas problem

Woman Escaped From Being Abducted By A Kidnapper, After She Asked For A Lift From A Stranger.

Check out this small and modern house you may build if you love small houses.

We are ready for war and be prepared to face what you've started' Angry foreigners warn lux.

A horrific crash killed six people and sent four others to the hospital.

Touching, PIC of 4 EFF comrades who died in an accident shown. See who they are