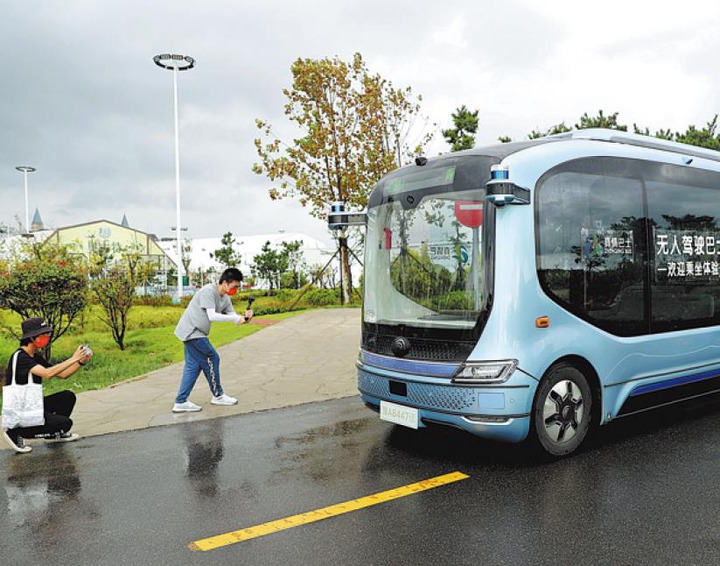 An autonomous bus has a test drive with passengers aboard in Qingdao, Shandong province on Sept 19. [Photo by Zhang Jingang/For China Daily]

International carmakers are partnering with Chinese companies to tailor autonomous driving solutions for their vehicles sold in the world's largest vehicle market.

Last week, the largest carmaker in the United States said it is investing $300 million in Chinese autonomous driving startup Momenta.

The deal is expected to accelerate General Motors' development of self-driving technologies for its vehicles in China, said Julian Blissett, executive vice-president of GM and president of GM China.

"Customers in China are embracing electrification and advanced self-driving technology faster than anywhere else in the world," Blissett said.

China is the biggest market for GM. Last year, it sold around 3 million vehicles in the country.

GM did not reveal details such as when the technologies co-developed with Momenta will be used in its vehicles.

Founded in 2016, Momenta is one of the most promising Chinese startups in the autonomous driving industry.

Prior to the deal with GM, it raised $700 million from investors including Daimler AG, SAIC Motor and Toyota.

Unlike many startups, it has a "two-pronged" strategy, which focuses on mass-production-ready solutions as well as full autonomy.

Besides its partnership with Momenta, GM is developing autonomous driving technologies through its subsidiary Cruise.

The carmaker said the system will be introduced into more vehicle models available in the country.

"The approach in China is somewhat different from what we see in Europe and the US," said Stephan Woellenstein, CEO of Volkswagen Group China, earlier this month.

In the US and Europe, Volkswagen is working with US autonomous driving startup Argo.

Woellenstein said the carmaker will make the most of its global experience but will do it in a China-specific way in partnership with local companies.

"We believe we need a strong Chinese partner or two on our side in order to comply with the forthcoming frame (of autonomous driving) in China," he said.

"We try to keep the global synergies but in a China-specific way. We cannot do it alone."

Woellenstein did not reveal the names of possible Chinese candidates but he said they are in intense talks and Volkswagen is "coming to conclusion very soon who this partner will be".

Volkswagen is already working with Chinese drone maker DJI on advanced driving assist functions to be used in vehicles produced in China.

Outside of China, Volkswagen and US startup Argo have unveiled the first version of the ID Buzz AD van in Munich, Germany.

In 2025, Volkswagen's subsidiary Moia will commercially launch the ID Buzz in Hamburg, Germany, as part of a self-driving ride-pool system.

Volkswagen AG Chairman Hebert Diess said autonomous driving will entirely change the world, because it will change how the people will use vehicles.

Diess expects the mobility market to double in size in 2030 because of autonomous driving.

Top 8 of the World’s Most Dangerous Foods

Heartbreaking news: Single mother of two kills herself after battle depression for a long time